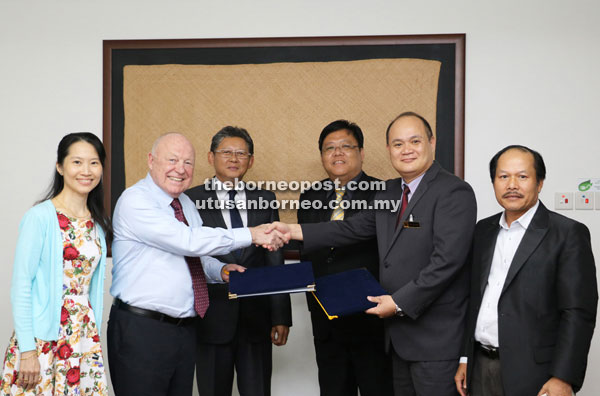 Pickenhagen (left) and Lim exchange the signed documents while witnessed by (from left) Tan, Bakrie, Joseph and Dr Simon.

KUCHING: Sarawak is the only state with an integrated waste management system (IWMS) which allows for the management of both municipal and hazardous waste in a holistic and integrated manner.

The 25-year-old concession is held by Sarawak Wastes Management Sdn Bhd (SWM), a joint venture company formed by the state government and Trienekens GmbH of Germany with Trienekens (Sarawak) Sdn Bhd as the operator.

Following the upgrade of Serian district as the state’s 12th division, SWM recently inked a concession agreement with Serian District Council (SDC) to address the provision of waste management services of areas affected by the boundary change in the neighbouring Padawan Municipal Council (PMC).

Siburan, Tapah and Beratok in particular, which were previously under PMC, have now come under the jurisdiction of SDC.

“Considering Trienekens’ proven expertise, experience, track record and commitment in the state, we are happy to have them continue their service in Siburan, Tapah and Beratok,” said SDC chairman Lim Hock Meng in a statement.

He also expressed his confidence that the operating company would continue to render services of the highest standards to local residents and that the council would also consider extending Trienekens’ services to other areas in Serian.

The concession agreement-signing ceremony was held at SWM headquarters in Jalan Sungai Tapang here, where SWM was represented by its director Jurgen Pickenhagen while Lim signed on behalf of the council.

Following the signing ceremony, they were taken on a familiarisation tour of the disposal and treatment facilities at the Kuching Integrated Waste Management Park in Mambong near here.