Sunday, December 4
You are at:Home»News»Sarawak»Civil servants thankful for PPA1M houses 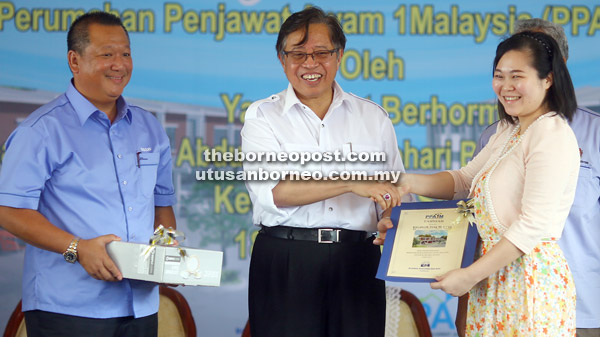 KOTA SAMARAHAN: Civil servants who have their applications approved to buy the 1Malaysia Civil Servants Housing Project (PPA1M) houses are thankful the project is finally implemented in the state.

According to civil servants who have applied for houses under the PPA1M @ Muara Tuang project, they couldn’t wait to move into their new homes and thanked the government for assisting them to have their own houses.

One of them, Elizabeth Jong, a staff nurse at Sarawak General Hospital (SGH) Heart Centre, said she first knew about the project in October last year.

“I have been working in the civil service for four years. Now, I can look forward to move into my own house,” she said.

not only affordable but located near her workplace in Kota Sentosa.

PPA1M houses are meant for civil servants, be they working under the federal, state, local government or government-linked companies.

The houses are said to be priced 30 per cent below market prices because of government subsidy.

The project was first launched in Miri recently and the project in Muara Tuang is only the second PPA1M project in the state.

Blessed Builders Sdn Bhd is the developer of the PPA1M @ Muara Tuang project.

Jong, Timothy and Sharifah Rohaidah were among seven civil servants given offer letters during the ceremony, being the earliest to have their applications approved to buy houses under the PPA1M @ Muara Tuang project.

Previous ArticleMalaysia firm in not allowing screening of ‘Beauty and the Beast’
Next Article Cancer accounts for 13.56 per cent of deaths in government hospitals