Sunday, January 19
You are at:Home»Features»Making ‘Manah’ a living legacy 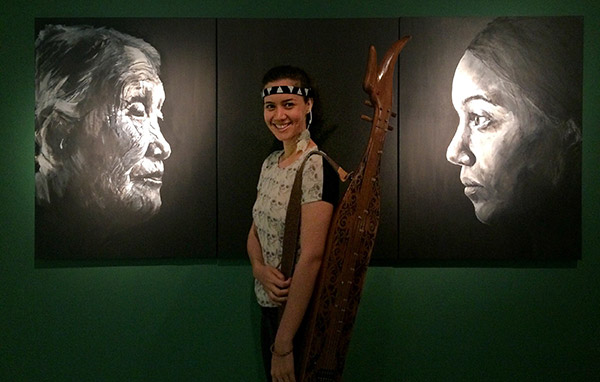 Alena and The Storyteller

THE first time I saw Alena Murang, she was on stage at Calvary Convention Centre, standing barefoot in front of a famous red-and-white sign, telling the audience about old Kelabit songs and playing the sape.

Half a year after her talk at TEDxKL 2016, I met Alena again at Galeri Petronas Suria KLCC where she was one of the participating young contemporary artists featured in an exhibition called ‘Manah: A Living Legacy’.

The exhibition seeks to challenge the notion that indigenous culture is mysterious, inferior or backward. Manah means “ancient” or “old way” in the Temiar (Orang Asli) language.

The 27-year-old, touted as a Borneo art forms pioneer, gamely answered one of my burning questions: How does one prepare for an event where most of the presenters speak for 20 minutes straight without a flaw?

“You are invited months in advance and given every possible help, including a speaking coach but I didn’t use one until the day before the event,” she said with a grin.

It was the day after the official launch of Galeri Petronas’ first art exhibition of the year that we sat down in one of the cleverly hidden rooms where Alena spoke with the same gentleness and conviction that she did on the TEDxKL stage about her wider mission and role as an artist to make people feel and see how we are in danger of losing our treasures, both cultural and natural.

“I ask myself every day why I do what I do,” she said.

From a mixed heritage of Kelabit and English-Italian, Alena grew up in Kuching and developed an interest in her Kelabit heritage while exploring her own identity.

She spoke about how the elders possessed the strength and resilience to go through so much change in the last 50 years, and yet were the most caring and compassionate people she ever met.

“I feel I’ve learnt a lot from the elders. They haven’t been through the modern education system, yet they know so much — when to plant rice, when to harvest, how to live with the land,” she said, adding that with every passing year, some of these elders passed on and with them, their wealth of knowledge.

While it’s true the Kelabit farming calendar holds little immediate significance to a modern Bornean’s digital lifestyle, Alena is convinced we are losing the plot when it comes to the bigger picture of what is happening to the world and the environment.

“Stories teach you values, how to live with nature, take what you need from the jungle, collect water and so on. For indigenous people the world over, these stories and oral traditions are very important because you only have a story when the story has a place or context. These are stories that come from the jungle, river, and trees.”

There is no denying that indigenous people are very closely connected to the environment. 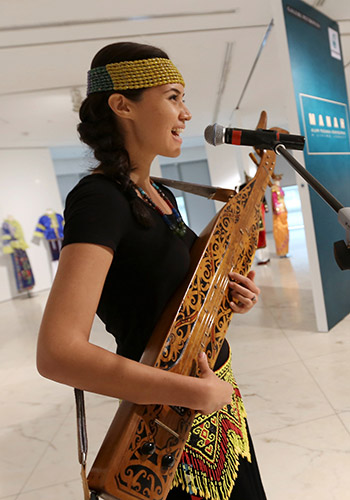 Performing during the launch of Manah: A Living Legacy at Galeri Petronas.

Among the objectives of ‘Manah: A Living Legacy’ are to look at the sacred bond between the indigenous people of Malaysia and their environment, and to offer a timely reminder to go back to the basics.

Ratna Siti Akbari, curator of Galeri Petronas, earlier pointed out that modern civilisation has brought a lot of imbalances over the past 200 years, especially now that resources are scarce.

“How could we not revere the land and its bounty that has sustained us,” she told reporters, pointing out that it is time for young minds to bring this very important and sacred relationship to the fore — be it in the arts, science, or technology.

Alena is part of the ‘Manah: A Living Legacy’ exhibition together with three other young indigenous artists who draw from their respective cultures and incorporate them in their art.

“This is one of the outcomes of banding together as a collective group,” she said.

When their Temuan counterpart Shaq Koyok attended a Petronas workshop, he met the curator Dr Baharudin Arus and told him their little group had been passing proposals around.

‘Manah’ was already being developed and the four of them managed to get a place in it. 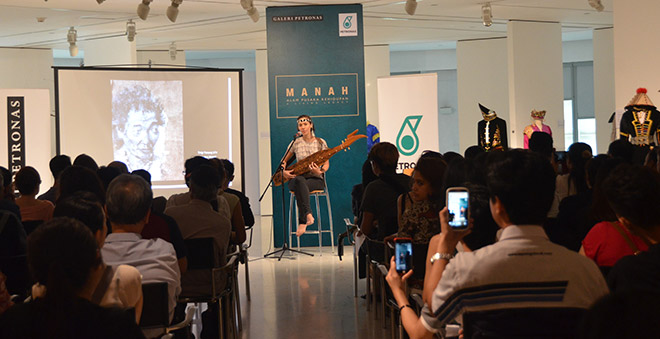 At a workshop on music from Borneo.

Alena’s piece is called ‘The Storyteller’ — a triptych with an old woman’s wrinkled face on the left and a young woman’s face on the right. Between them is an entire canvas blotted in black.

I like to think the black rectangle represents time and space — the distance between two very different generations — namely a young person looking to an elder for knowledge which only exists in their memories.

It was also the perfect spot to interrupt their imagined interaction for a photo opportunity.

“Part of what I do is learning old songs from the elders. There are maybe four or five of these elders who still remember these old Kelabit songs,” Alena said, adding that these were songs from the pre-Christian era and their content of elements such as love affairs, animal sacrifices or headhunting, were edged out with the arrival of missionaries.

“A lot of the songs are forgotten or not sung anymore. I go back to learn them, make them a bit more contemporary and share them with everybody.”

There is an audio that accompanies the triptych so that a visitor could imagine how one such lesson would sound like.

These Kelabit elders do not write. Their stories — both mythologies of their culture as well as children’s stories — are told though songs that sound like chants. And these songs are slowly being lost because only a handful of women who know them is left.

“This puts the continued existence of their songs more at risk,” Alena noted.

“I went back to learn from the elders. I recorded the songs, learned to sing them, then made them more contemporary and relevant to modern listeners but tried to retain the emotion and meaning.”

When Alena was at La Salle College of the Arts in Singapore, her lecturers told her she cared too much about community and people to ever be a good fine artist. Two years later, she was still trying to understand what that meant but it hasn’t stopped her from accumulating a long

list of art projects, most of which are by private commission and they look fine to the casual viewer.

“In the last five months of the course, I was doing a lot of things related to the kampung. I joined the elderly womenfolk looking after the padi and doing the harvest. Through my discourse and research, I think they saw I probably have a wider mission. I care more for the community.”

Alena is learning Kenyah songs and the sape from Matthew Ngau Jau. Her own on-going project with the Kelabit women is taking her places. Indeed, art is where Alena feels most at home.

“I feel happy when I do music but with music and performing, you are on stage and it takes a lot of energy sometimes. And art energises me,” she said.

‘Manah: A Living Legacy’ is located at Galeri Petronas Suria KLCC and will run until April 16.