Tuesday, November 24
You are at:Home»News»Sarawak»Nothing wrong with seawater off Miri, says naturalist 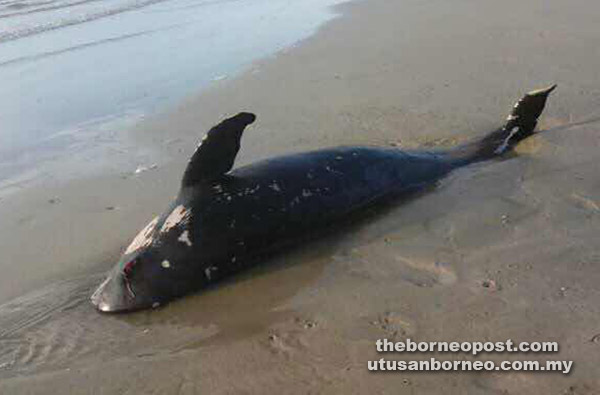 Carcass of the finless porpoise on a beach near Luak Esplanade.

MIRI: Locals are assured there’s nothing wrong with the water along the coastline here, following the discovery of a dead finless porpoise near Luak Esplanade on Friday.

The 1.39m carcass was found by a worker of a beach clubhouse after noticing a stench.

It is learned that many dead marine creatures including fish and crustaceans had also been washed ashore along the beach there since Monday.

When contacted, the treasurer of the Malaysian Nature Society (MNS) Miri branch Iqbal Abdollah said the monsoon season could be the reason for this.

“The people of Sarawak should not worry as the porpoise is quite commonly found in the waters here. It might have lost its direction, causing it to head towards the shore. It’s not uncommon to find porpoises stranded on beaches in Sarawak.

“Once beached, there is slim chance for them to survive, unless found by humans and returned to the water in time,” he told thesundaypost.

According to Iqbal, the current monsoon is expected to last until end of this month.

“I believe the incident, including the carcasses of other marine creatures washed ashore, is due to natural causes. The underwater temperature is about 25 to 26 ºC while the temperature above it is 30 to 31ºC which are still good for the aquatic animals.

“Another positive sign is the presence of ‘bubuk’ (tiny shrimps) which indicates the fishes are having enough food. Thus once the monsoon season passes, everything will be alright,” he assured.

Iqbal is assistant director of Miri Inland Revenue Board (IRB) and  a nature lover. At the International Conference on Marine and Aquaculture (ICOMSA) in March last year, he presented a paper on his findings on the Pygmy sperm whale after its carcass was found at Kuala Baram in 2015.