Wednesday, September 28
You are at:Home»News»Sarawak»‘One in 19 Malaysian women at risk of breast cancer’ 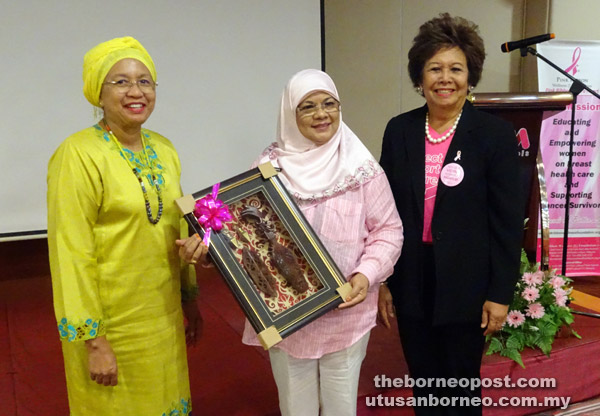 (From left) Juriah presents a memento to Mariam, witnessed by Maniseh. — Photo by Agnes Tugong

KUCHING: One in 19 women in Malaysia is at risk of getting breast cancer, which constitutes 31 per cent of cancers affecting women.

National Population and Family Development Board (LPPKN) chairwoman Datuk Mariam Mas Yacob said given the statistics, it was pertinent for women to go for regular examinations.

“But we still need to get as many women as possible to undergo either clinical or self-examination,” she spoke at a breast healthcare and wellness campaign in M Hotel here yesterday.

Quoting statistics in 2008, Mariam said 19 per cent of the 3,209 new breast cancer patients reported were already at Stage 4, indicating that the percentage of late detection was still high.

She pointed out that not only late detection meant higher risks to patients, but the cost of treatment undertaken by the government was likely to soar as well.

“There are factors contributing to cancer deaths, among them refusal to go for examinations – perhaps fearing the outcome. Some opt for alternative medicine such as seeking treatment from ‘bomohs’ (witch doctors) for the Malay community. Some cannot bear the pain of treatment.”

Mariam therefore advised women to go for regular examinations to detect breast cancer at a much earlier stage.

She said this year alone, the government allocated RM30 million in mammogram subsidies to benefit about 12,000 women nationwide.

“For Sarawak, this programme will begin in April. I hope you all would grab this opportunity to register for subsidised mammogram at participating clinics.

“This subsidy is meant for all those earning RM10,000 and below, which means that almost nobody is left out.”

Previous ArticleCancer accounts for 13.56 per cent of deaths in government hospitals
Next Article Housing project for civil servants launched