Wednesday, December 7
You are at:Home»News»Sarawak»Abang Johari makes first visit to China as CM 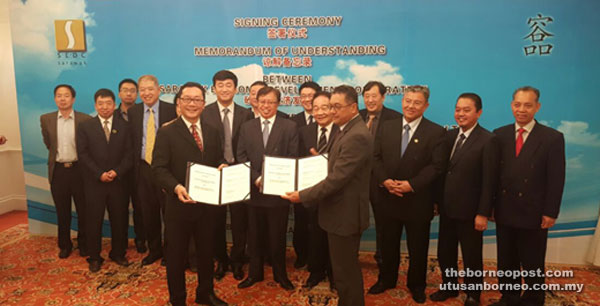 BEIJING: Chief Minister Datuk Amar Abang Johari Tun Openg made his first visit to China on Sunday since his appointment as chief minister two months ago.

The MoU is to further develop Sarawak’s tourism potentials and hospitality management.

The areas covered under the MoU are:

China Express Airline will make Kuching as its South East Asia hub; Beijing Glory shall manage two SEDC hotels – Damai Puri and Grand Margherita – in Kuching; there will be increasing connectivity for Chinese, Korean and Japanese tourism markets;  Beijing Glory will take over management of some tourism destinations such as Bako and Mulu National Park; there will be rebranding of SEDC’s Sarawak Plaza.

Later yesterday, the delegation flew to Kunming City as part of the itinerary for the weeklong visit, and thereafter to Hong Kong and Guangzhou.