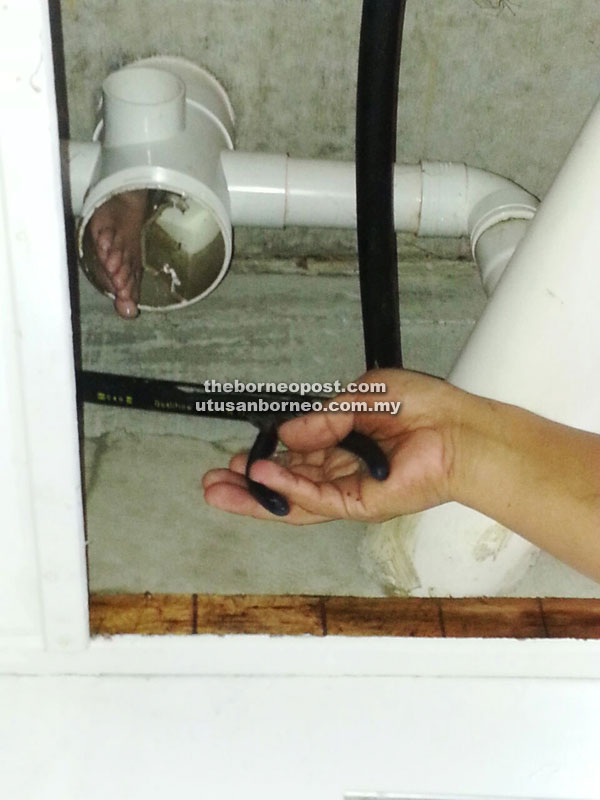 Photo shows the boy’s trapped foot moments before it was freed from the pipe.

KUCHING: Firemen came to the rescue of a three-year-old boy after his foot became stuck inside the drainage floor trap of a bathroom in Petra Jaya yesterday.

The incident happened at 4.15pm when the Fire and Rescue Department (Bomba) received a distress call about the child’s predicament and rushed to the second floor of a commercial shoplot at Jalan Tun Abdul Rahman Yaakub.

Personnel from the Petra Jaya fire station arrived at the scene to discover the boy’s left foot stuck at the heel inside the bathroom’s floor trap and immediately went to work to free the distressed child.

A Bomba spokesperson said its personnel resorted to going to the first floor of the shoplot in order to gain access to the pipe in question.

“Firemen proceeded to cut a small opening in the pipe before reaching inside to slowly push the boy’s foot out,” said the spokesperson, adding the victim sustained only a minor cut to his foot as a result of his ordeal.

The entire process to free the child took 45 minutes, with the rescue operation coming to and at 5.20pm.