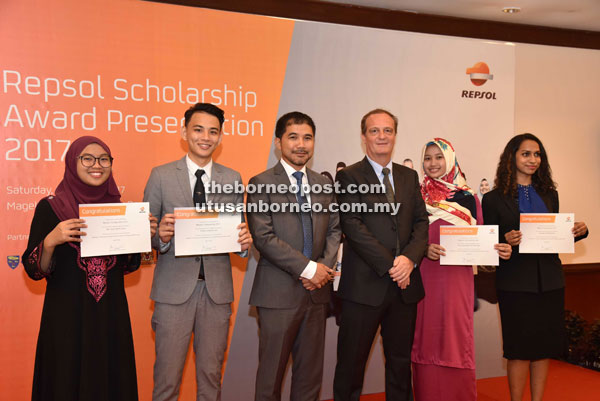 They were among 16 recipients of the Repsol scholarship awards for 2017. The other 12 were drawn from Universiti Teknologi Malaysia (UTM) with 5 recipients, Universiti Malaya (UM) with 3 recipients and Universiti Sains Malaysia (USM) with 4 recipients, pursuing Bachelor’s and Master’s degree programmes.

Speaking at the presentation ceremony, Repsol Malaysia BU subsurface manager, Alan Britton, said this scholarship programme started during the legacy Talisman days and for good reason Repsol continues to carry on with this programme as education and the development of human capital is also a core Repsol value.

This scholarship programme was initiated in 2009 and over the first five years, a total of RM2.3 million was disbursed to 57 students at 3 different partners, UM, UTM and USM, to those majoring in geology, geophysics and engineering.

The 2nd cycle from 2013-2017 witnessed a further allocation of RM2 million and the inclusion of a new partner university in UMS. To date, a total of 102 students have benefited from the scholarship programme which is now nearing the end of the 2nd cycle.

Britton stated that the Repsol scholarship programme also complemented the government’s goal of encouraging students to pursue tertiary education in science, technology, engineering and mathematics, indirectly helping to produce technically competent local graduates that fulfill the demands of the industry, especially for the oil and gas sector.

He reported with pride that 15 graduates from the 1st cycle were subsequently employed by Repsol and he hoped they will continue to hone their technical skills and acquire experience to contribute to the company and grow in their respective careers.

This recent climb marks the fifth consecutive year that Repsol staff has demonstrated their caring gesture by volunteering to conquer Mount Kinabalu and raise funds for charity. Since the first climb in 2013, RM335,000 has been raised and distributed to charity organisations here.