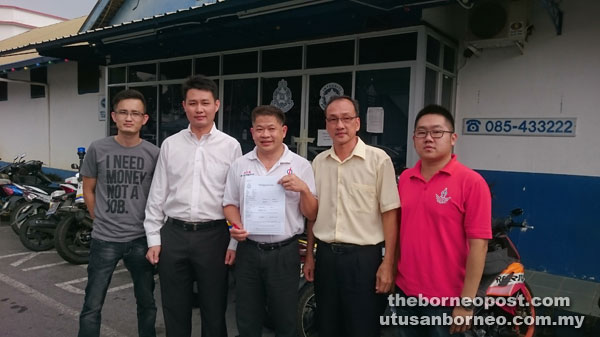 Dr Ting holds up a copy of his report outside the police station.

MIRI: A police report has been filed against extra paid parking spaces at shops near the seahorse roundabout here.

Pujut assemblyman Dr Ting Tiong Choon filed the report at the Miri Central Police Station yesterday against the new parking bays, which are scheduled to come under the parking fee collection system from April 1.

“The additional car spaces are from the side of the road where there used to be a yellow line and eventually the line has been marked off and been drawn and replaced as a parking space so the driveway now is very narrow,” he told reporters, claiming there could be illegal occupation of public space for private gain.

“Since the road has become narrow, I don’t think it is appropriate for them to take up the space and turn it into parking spaces.”

Dr Ting claimed lorries could no longer load or unload their goods in the area.

According to him, the Miri City Council (MCC) should also refrain from imposing parking fees in the area.