Wednesday, July 15
You are at:Home»Columns»Nature Matters»Here today and gone tomorrow 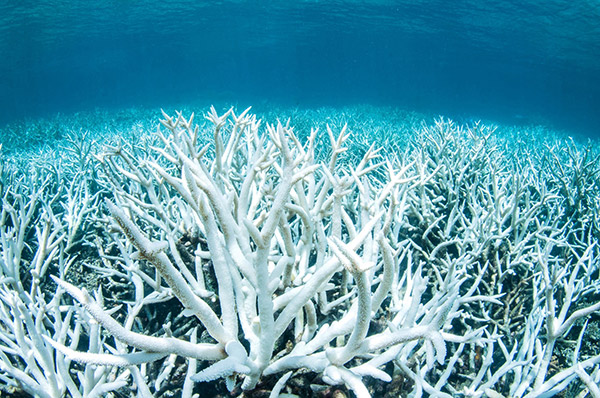 Bleached coral is seen at Australia’s Great Barrier Reef near Port Douglas on Feb 20 in a handout image from Greenpeace.

THE Great Barrier Reef off the coast of Queensland in north east Australia is under severe stress. This is the largest coral reef formation in the world, stretching for over 2,600km and covering an area equal to that of Germany. Composed of 2,900 single reefs and nearly 1,000 islands, it is the world’s largest living organic structure. It supports over 11,000 species of organic life with 400 species of hard and soft coral, and 1,600 species of fish, to include 134 species of ray and shark.

Although protected by its designation as the Great Barrier Reef Marine Park, covering 3,400 square km of the Coral Sea, and more recently declared as a United Nations World Heritage site, alas, it cannot escape climate change.

Previous threats, of tropical cyclones and the proliferation of the dreaded crown of thorns starfish, which devours the coral polyps, are still relevant today but the greatest threat is that of coral bleaching caused by climate change. The latter became apparent as the result of the 1997 to 1998 El Nino episode, which also affected coral reefs in Sabah.

Until relatively recently, in Australian summers, corals have survived in sea temperatures of about 29.5 degrees Celsius. An increase of only 1 degree Celsius results in coral stress and inevitable bleaching. Combined, these three factors have resulted in the disappearance of half the coral cover of this reef since 1985. Small changes in seawater temperatures have dramatic effects upon coral growth. Bleaching isn’t simply about hotter waters but also about increased amounts of ultraviolet radiation reaching the corals – the continuous strength of the sun over many months. 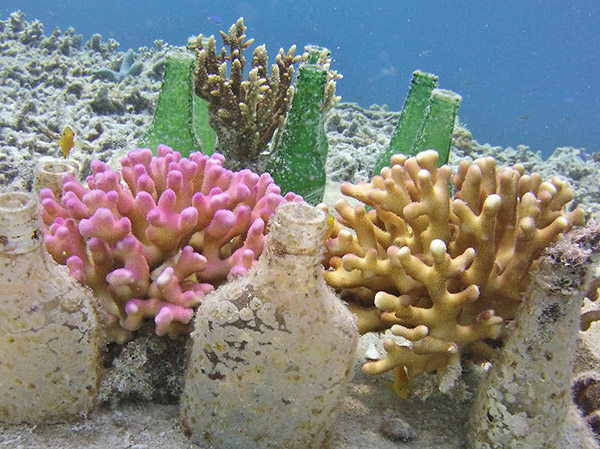 In studying a map based upon extensive surveys of the Great Barrier Reef Marine Park Authority, carried out between March and June 2016, it is evident that the greatest coral mortality rates, of between 10 and 50 per cent, are seen from the northern Cape York southwards to Cairns. From Cairns to Townsville, further south, the mortality rates drop significantly from 9.9 per cent to 0.1 per cent. Even further south to Rockhampton, no coral deaths have been recorded.

Clearly there are varying degrees of coral bleaching according to the water temperature gradient from the warmer north to the slightly cooler south, along which the warm East Australian Ocean Current runs.

In some places, the hotter water extended down to a depth of 20 metres below sea level and in other places down to 40 metres, thus affecting deeper water coral species.

Bleaching causes the expulsion of microscopic algae that live within the tissues of corals and which give the corals their distinctive colourations. These algae photosynthesise, and thereby give energy to their coral hosts. Even without climate change, it can take up to 50 years for a coral reef to become established. With ever-increasing bleaching events, it now seems that once the coral dies, it never re-establishes itself, yet much depends on the fragility of each species of coral.

Much also relies upon the chemical composition and translucency of the seawater. In the central and southern part of the Great Barrier Reef, the inshore reefs have been affected by estuarine sediments caused by the run-off into rivers from farmland. The sediment, constantly stirred up by tidal and wave action, in its suspended state, blocks out sunlight so necessary for coral growth.

The seawater in these areas is also contaminated, through agricultural fertilisers used on sugarcane and banana plantations or herbicides used on cattle ranches. This increases the nutrient levels of seawater, allowing blooms of microalgae to flourish, on which feed the larvae of the crown of thorns starfish, thus causing an explosion in the starfish population.

Other major contributors to the accumulation of sediments have come through the need to create deeper water shipping lanes for coal boats. The dredgers disgorge their collected material out at sea. Dragging anchors from the coal boats have also disrupted the continuity of some reefs. Associated with energy generation at coal-fired power stations, we all know that fossil fuel burning has led to higher atmospheric carbon dioxide levels and is a major contributory factor in climate change. Gradually, seawater absorbs this carbon dioxide, thus acidifying the water which has led to the demise of coralline algae and consequently to further reef bleaching. 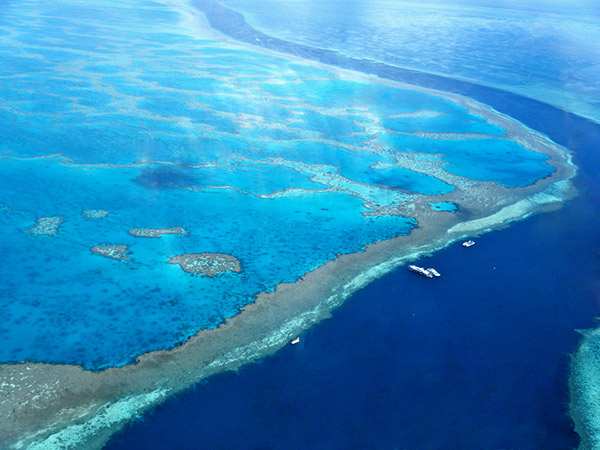 The Great Barrier Reef is seen from the air.

Australian marine biologists and conservationists may have picked up the ideas of the late Professor Steve Oakley in his work in coral restoration at Pom Pom Island, in the Sulu Sea off north east Sabah.

There, he and his volunteer team established the Tropical Research and Conservation Centre (TRACC) about five years ago. The coral reefs off that island, once dead through fish bombing and bleaching, have sprung into new life.

A very clever system was devised by Oakley in planting new corals into disused glass bottles, which were inserted into holed concrete casements lowered onto the coral reef. Granted, this is on a smaller scale compared to trying to recolonise the massive bleached areas of the Great Barrier Reef but, as the old saying goes, ’From small acorns, great oak trees grow!’

In my tribute to Oakley (thesundaypost – Feb 26) I mentioned that the 25,000 corals replanted by his team have restored fish life by an increase of 500 per cent in only a few years. This simple and practical scheme has now received worldwide acclaim, for it won the prestigious 2016 International Energy Globe Award, in the best project ‘Water’ category, declared at the United Nations Climate Change Conference on Nov 10, 2016. Sadly, exactly a month later, Oakley passed away. This innovative project was entitled, most appropriately, as ‘Restoring coral reefs to survive climate change’.

The replanted corals on the reefs off Pom Pom Island are flourishing and hopefully the methodology employed there may be applied in the near future to those bleached areas of the Great Barrier Reef. This gigantic series of coral reefs is visited by two million tourists annually, and accounts for the employment of 70,000 people in reef based tourism.

Bringing in an annual revenue to the Australian economy of A$6 billion, restoration and protection seems to be the order of the day.