Tuesday, May 17
You are at:Home»Columns»Breaking Barriers»Make every hour Earth Hour 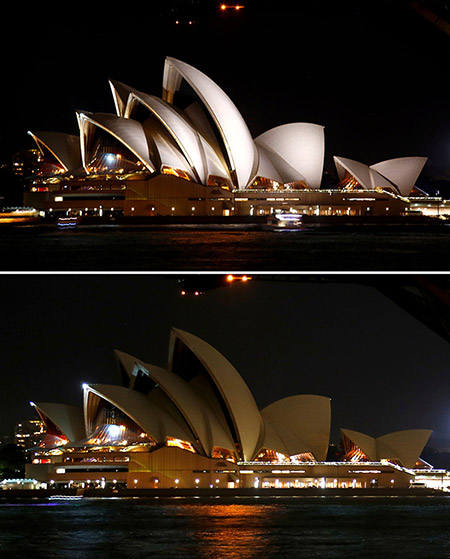 A combination photo shows the Sydney Opera House before and during the tenth anniversary of Earth Hour in Sydney, Australia. — Reuters photo

EARTH Hour was observed the world over yesterday. What began in Sydney, Australia as a lights-off event in 2007 by the World Wide Fund for Nature (WWF) has gone global. The symbolic act of turning off all non-essential lights for one hour from 8.30pm to 9.30pm local time was a commitment to take action on larger environmental issues and climate change.

Global warming is real. Data from reputable agencies like the National Aeronautics and Space Administration (Nasa) and Climatic Research Unit have shown that the temperature rise is the result of human activities, which has been happening since the beginning of the last century.

Deforestation and burning of fossil fuels have markedly increased the amount of carbon dioxide in the atmosphere. This has led to rising global temperature, warming oceans, shrinking ice sheets, rising sea levels and extreme weather patterns, among others.

We should all be concerned because we and the generations that come after us will ultimately be affected by these environmental changes. Therefore, our actions have to go beyond Earth Hour. This should not be something we do for one hour and forget about it until the next year.

The Earth Hour 2017 Event Playbook suggests some initiatives we can continue doing after the event is over. They can be something simple yet impactful like switching to LED lights, using reusable bags where possible, and purchasing only food that is necessary to minimise wastage.

When this event comes around each year, I am reminded of the habits my parents inculcated in me when I was a mere kid.

“Turn off the light in your room,” my mother would call after me, “and the fan too.”

That was the line she had to repeat since the day I was given my own bedroom. She knew me well. I would just walk out and leave everything on. Heeding her call, I would go back to turn them all off.

My father used a different approach if he caught me doing it. “You must be responsible. Remember to turn off everything when you are not in the room,” he would tell me.

It was a practice they themselves followed diligently, whether it was the living room, dining room or toilet. If no one was in the room, the lights must be turned off. As for me, it was the fear of being admonished that made me do it rather than anything else. The habit eventually stuck on me and one I practised spontaneously up to this day.

For my parents, it was not so much about fighting climate change. This was unheard of during those times. Their motivation was to reduce wastage and consequently save money on the household’s utility bills.

And my father, being an electrical engineer, figured out the amount we could save in the long run if the lights and other appliances were turned off when we did not need them. To him, a cent saved was a cent earned.

Both my parents came from an era when money was hard to come by. Their families were not rich. What they earned in their early years were through hard labour. As such, they were thrifty, spending prudently and saving as much as they could.

I was also taught not to waste food. There was seldom a morsel left on our plates after each meal. During celebrations, when there was more food than we could consume, we either shared them with relatives and neighbours, or kept them in the refrigerator to be eaten over the next few days. It was a taboo to throw away food in our family.

My father exemplifies the adage of waste not, want not. At any one time, he owned only two pairs of footwear; one pair of black working shoes and a pair of slippers; both bought from Bata stores. It was only in his later years that he added a pair of sandals for casual occasions and morning walks.

I try to follow in his footsteps, so to speak, but it is not easy. I have not gone through the tough times like him. Nevertheless, I am glad what he and my mother had taught me is beneficial towards stemming climate change although that was not their intention in the first place.

In addition to that, I try to reduce wastage of paper in my work. The production of paper requires trees to be cut down and consumes a massive amount of energy and water. To reduce this harmful impact to the environment, I have stopped giving printed handouts for the workshops I conduct.

Participants who want them will get PDF copies via email instead. For each workshop, I save a ream of paper. This can potentially amount to 10 reams of paper per year, not to mention the electricity and toner needed for printing them, and the waste they become when discarded.

This may not amount to much as compared to large companies that print tens of reams of documents per day. However, imagine 10,000 or one million people doing this and practice other environmental conservation methods. If we collectively make an effort, the impact will be significant in slowing down or even reverse global warming.

The Earth Hour 2016 Report noted that a record breaking 178 countries and territories participated in the event last year where more than 12,700 landmarks switched off their lights and 2.4 million actions were taken to conserve the environment. Here is hoping we will see better results for 2017 and the actions continued throughout the year after that. This Earth is all we have. We ought to take better care of it.