Sunday, November 27
You are at:Home»News»Sabah»Man drowns, colleague injured when vehicle plunges into sewage 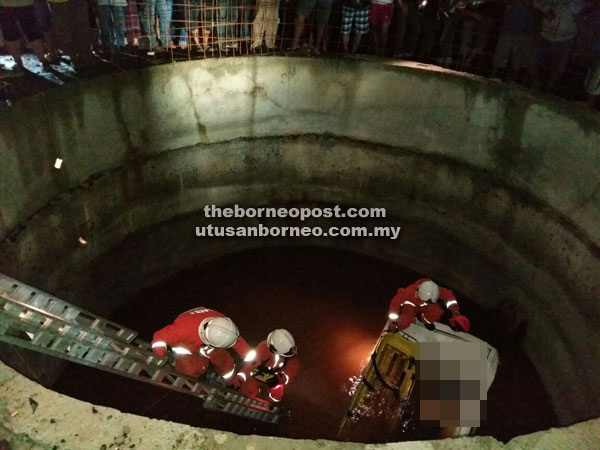 Fire and rescue personnel extracting the victim’s body out from the van.

BEAUFORT: A man drowned while his colleague escaped with minor injuries after the Nissan van they were travelling in plunged into a sewage that was under construction at Km 4, Beaufort/Papar Road at the Klias roundabout here on Tuesday.

Andrew Bin Mustal, 27, from Kampung Nosoob, Penampang died when he was trapped inside the van that submerged under six meters of water inside the sewage around 8.15pm on March 28.

His colleague and driver of the van, Elson Isos, 22, also from Kampung Nosoob, Penampang managed to climb up the trapped van.

District police chief DSP Azmir Abd. Razak said initial police investigation revealed that the duo were on their way to Kota Kinabalu from Labuan when the driver tried to avoid hitting the roundabout.

“The van drove up the roundabout and plunged into the sewage that was about six meters deep.

“The driver managed to climb up the vehicle but the victim, who was at the front passenger seat, was trapped inside.

“It took about one hour for the fire and rescue personnel to extract the victim’s body from the vehicle,” said Azmir, adding that the body was then taken to the district hospital for a post-mortem.

No other vehicle was involved in the incident and police are investigating the case under Section 41 (1) of the Road Transport Act 1987.