Thursday, August 13
You are at:Home»News»Sarawak»Mystery of missing workers deepens 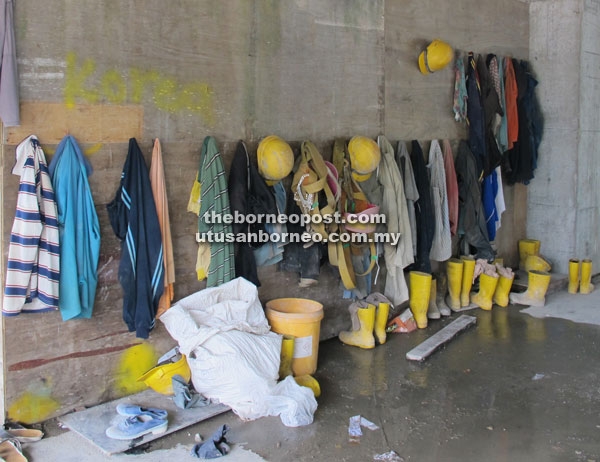 The personal belongings of the North Korean workers at a construction site in Tabuan Dayak are still neatly hung against the side wall of their makeshift living quarters.

KUCHING: The 176 North Korean workers who were known to have entered the state to work at construction sites have all left their workplace and seemed to have disappeared into thin air.

The mystery of their whereabouts deepened yesterday when State Immigration director Ken Leben told The Borneo Post that technically they should all be still in the state as there are no record of them leaving.

The disclosure of the North Korean workers in the state has attracted great international interest but further attempts to find out more about their situation hit a brick wall when Ken said he could not disclose any further details on the issue.

He said he had received a directive from Putrajaya not to comment on the workers’ situation because of the fragile diplomatic relationship between Malaysia and North Korea.

On March 17, The Borneo Post team visited the construction site where a team of North Korean workers were working and found that they had all left seemingly in a great hurry as all their personal belongings, work clothes, tools, helmets and boots were left behind in the two makeshift rooms in an uncompleted building they used as their quarters but their stores were locked.

The project they were working on had stopped but yesterday when the team visited the same site they found that construction at the site had resumed but by local workers.

Intriguingly, all the belongings left behind by the North Koreans were still left untouched at their quarters.

During that visit, The Borneo Post interviewed an Iban worker who only preferred to be called Alec who said the North Korean workers had left.

“We used to see them working here. But, now we just don’t see them anymore. They just disappeared and we don’t know where they are.”

Alec said the North Korean workers were mostly middle-age men and seemed to be more than 40 years old. The rest were younger men between 20 and 30 years old.

“They were very co-operative and they displayed a high team spirit. Even doing something not so heavy, the others would help to carry it. They seemed to work at a slow pace but they worked very systematically.

“After we have clocked out, we could still see them working. And the next day when we start work, they would normally complete that particular part of the project which they were working on the day before. They were like ants – working quietly and diligently to finish the workload passed to them,” said Alec.

Alec felt sorry for them because of their long working hours and their deprivation of entertainment and leisure.

“They seemed to work day and night. Apart from working, I don’t think they did anything else.”

“They were mainly middle-age men of above 40, so I don’t know how they could take it, working such long hours. I don’t think I could stand it,” said Alec who is in his 30s.

On food, Alec said they seemed to have a cook among them who would prepare the meals and deliver the food over to their worksite.

“Their food was like ours, local food like fried bee-hoon. There was nothing special about their food.  However, the way they distributed the food was like the military style where they proportioned systematically and fairly,” said Alex.

Another construction worker who only preferred to be called Bob said, the North Korean workers did not communicate much with the local workers unless it was very necessary.

“We used sign language to communicate. They are very secretive and reclusive and did not mix around with us or try to find out about our lives here.

“There was a leader among them and I think he was the contractor. He spoke English. And he seemed to treat the North Korean workers quite well,” said Bob.

The North Korean workers in Sarawak found themselves in the limelight following the assassination of Kim Jong-nam, the estranged half-brother of North Korean leader Kim Jong-un at klia2 on Feb 13.

Amid the plummeting bilateral relationship, Chief Minister Datuk Amar Abang Johari Tun Openg disclosed that there were 176 North Koreans working in the construction and mining sectors in the state.