Friday, June 25
You are at:Home»News»Sarawak»Serian to have new look 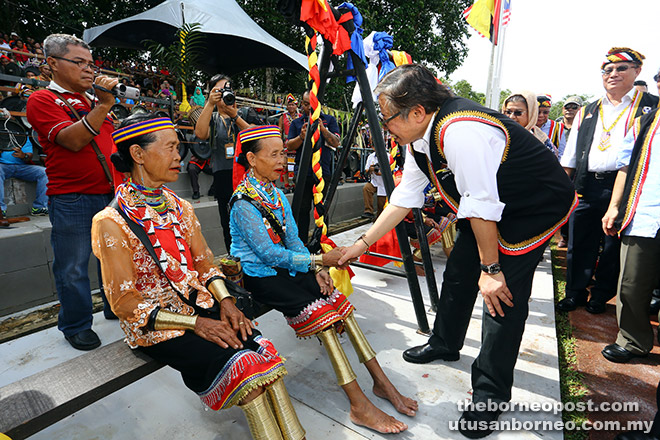 SERIAN: Serian Division, particularly the town area, will have a new look once the state administrative complex and conference centre, to be built on a 32-acre site, costing about RM200 million are completed by end of 2019.

Located near both projects is the 145-acre Serian New Township, which is being constructed in stages and due for completion within the next eight to 10 years.

An earth-breaking ceremony to mark the commencement of the projects was held at a site off Serian-Tebedu bypass, not far from the Resident and District Office, yesterday prior to the guests attending the Pesta Birumuh 2017 at the nearby Serian Sports Complex.

Sarawak Incorporated chief executive officer Zainudin Jaafar, who gave a briefing on the projects, said a lake within the site would also be beautified and maintained.

“So far, the projects have moved smoothly. By 2019, Serian will have a state administrative complex and a conference centre.”

On the administrative complex, Zainudin said the design would incorporate the iconic Baruk (traditional Bidayuh roundhouse) to reflect the local Bidayuh ethnic group who makes up the majority in Serian.

An artist’s impression of the state administrative complex which incorporates a Baruk.

It would also comprise a six-storey office complex cascading downward to two-storey office connected to one block of double storey reception/lobby and exhibition or function hall.

He also said a multi-service counter would be set up along the Urban Transformation Centre concept to facilitate (public) dealing with the government in Serian. The complex would also incorporate design-for-maintenance concept focusing on reduction in operating costs, energy-saving and environmental consideration.

As for the conference centre next to the state administrative complex, Zainudin said it would comprise a 3,180 square-meter main hall which can accommodate 2,000 guests, exhibition areas, conference rooms, cafeteria, covered car parking space of 140 bays in the basement, 380 bays of open parking space, open forecourt and facilities for disabled persons.

“Initially, the plan was to only accommodate 1,000 people. But the previous chief minister Datuk Patinggi Tan Sri Adenan Satem had requested the capacity to be doubled, when he came to launch the project last year. It is not only open for Serian folk, but everyone can come here to hold events and conferences.

Meanwhile, a press kit for the Serian New Township said site clearing works had been done from last December to middle of this month. This will be followed by earthworks and major infrastructure and river improvement works.

The mixed-use development spreads over 145 acres is estimated to have a gross development value of RM600 million. It will include a central business district and modern residential neighbourhood.

The commercial and residential developments at the Serian New Township are also slated to become the catalyst for social and economic growth in the division.