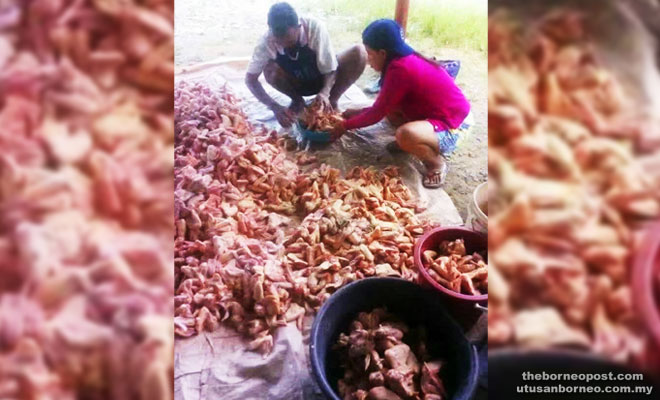 A man and a woman sorting out chicken wings dug up from Bukit Aup.

SIBU: Chicken wings are likely to be off the menu for sometime here following news on Tuesday of people in the Bukit Aup area digging up tons of frozen chicken wings buried there last Friday.

After the news went viral on Facebook and WhatsApp, the appetite for chicken wings here plummeted.

A widely circulated message reads: “Four containers of chicken parts were seized and destroyed by Customs Sibu. Either contaminated or smuggled…. Buried but dug out by people for sale at a price at low as RM5 (per kg). Consumption at your own risk,” further fuelled the aversion for chicken wings here.

Alas, for some such reminders came too late as several unsuspecting housewives, when interviewed yesterday, said they had already cooked the cheap chicken wings they bought before they knew about the source of the supply.

Before the news broke out those selling chicken wings apparently dug up at Bukit Aup at only RM5 per kilo at the Central Market here enjoyed roaring business.

Thankfully, so far the consumption of the ‘resurrected’ chicken wings has not done any harm as a check at the hospitals and private clinics here revealed there was no spike in food poisoning cases.

Unfortunately, barbecued chicken wings stall operators could become unwitting victims of the situation as one of them lamented that his would suffer.

“It was still OK on Monday night, as the news has not been as widespread,” said Michael Chen of Ana Borneo stall.

“I wish to assure our customers that our chicken wings are safe. Our wings are obtained from a safe supplier. They are of high quality.”

Meanwhile, Domestic Trade, Cooperatives and Consumerism Ministry (MDTCC) has warned that stern action will be taken against those who sell the rejected chicken wings.

Its state enforcement director Abdul Hafidz A Rahim said the ministry will take action under Section 23 of the Consumer Protection Act against those who sell the chicken wings that they collected from the site to consumers.

He said Section 23 of the Consumer Protection Act prohibits the selling of unsafe goods to consumers.

If convicted, the person can be fined not exceeding RM250,000 or three years’ jail or both, Abdul Hafidz said.

“We will continue to monitor the situation on the ground. If there is evidence that the people who pick (the chicken wings) sells it for the consumption of consumers in Sarawak, we will take strict action against them,” he said during a press conference in Kuching yesterday.

The police here have also sprung into action by cordoning off the site of the buried chicken wings ACP Saiful Bahri who is now outside the country, confirmed the police’s action in his text yesterday, saying: “We have cordoned off the area. We are working closely with the Resident’s Office, Health Department, Sibu Municipal Council and Sibu Rural District Council.”

A source from the police said they learnt of the discarded chicken wings only from Facebook, and “immediately, we sent our men in to seal off the area out of concern.”

The source said policemen had been guarding the site to prevent members of the public from entering.

With the Customs Department yet to shed light on the dumping of the chicken wings, speculations are rife over the source of the discarded food.

A reliable source said the buried chicken wings were shipped in four containers from New Zealand.

On why the chicken wings were ordered to be disposed of by the Customs Department, the same source said it was because the product did not have the halal certification.

Rumours on the internet said the incident was linked to the Customs Department, but when The Borneo Post contacted one of their officers in Sibu, it was told the chicken wing incident “has nothing to do with us”.

It quantity of the chicken wings that was buried is unclear but a purported eyewitness said the wings were sent in by container loads that added up to six tonnes.