Saturday, June 19
You are at:Home»News»Sarawak»Hunters stumble on missing man 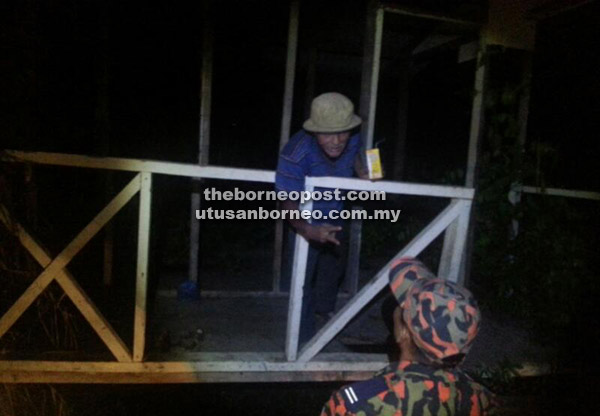 The elderly man seen in verbal contact with a rescue personnel.

SARATOK:  A 60-year-old man who was reported missing in the jungle of Engkudu Atas, Sebetan – about 13km from here – on Tuesday, had been found alive on Friday night.

According an officer  from Saratok Fire and Rescue Department (Bomba) Kho Bujang, Lawin Malin was found at Suria Palm Oil plantation, about 13km from his longhouse, Rumah Lembang, at around 10.30pm.

Residents of a nearby longhouse stumbled upon him while hunting in the area, Kho said, adding that upon being informed of Lawin’s presence, he led his men to the area to check.

On arrival at the search and rescue (SAR) control post, they noticed that the elderly man – said to be mentally unsound – was very weak, but he behaved quite aggressively when they tried to approach him.

“We had to call the police for assistance in bringing him back,” Kho added.

It is learnt that the victim has a habit of doing jungle trekking but would usually get home after that.

Hence, his family turned to the authorities for help when he failed to make it home on Thursday.