Tuesday, May 17
You are at:Home»News»Sarawak»Tini to represent Sarawak at national-level public speaking contest 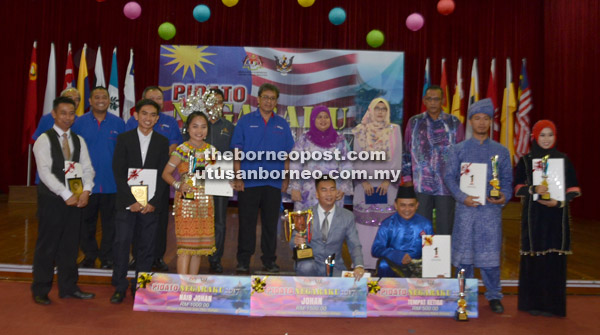 Rubiah (back row third right) with participants and guests.

KOTA SAMARAHAN: Tini Numpang will represent Sarawak at the national-level Public Speaking competition to be held in Negeri Sembilan in August.

Tini who represented Kuching and Samarahan Division won the state level competition when he beat six other public speakers representing the various divisions.

His speech on the topic “Merdeka Untukmu Malaysia” won him RM1,500 cash prize, a challenge trophy, champion trophy and certificate.

This year the theme of the Public Speaking contest is “Negaraku”.

In her speech before presenting away the prizes to the winners yesterday, MP for Kota Samarahan Rubiah Wang said that the theme “Negaraku” was very relevant, as it not only allowed participants to instill a sense of patriotism, apart from sharpening their public speaking skills.

“This programme also allowed us to instil love for the country in conjunction with the National Day celebration this year.

“Through such programme we should continue to revitalise, strengthen and maintain the spirit of unity among all races in Malaysia and to increase the level of patriotism and be proud of our nation,” she added.

Rubiah called on the youths to support the “Transformasi Nasional 50” (TN50) programme which was introduced recently by the federal government to entrust young people to become future leaders.

“This programme also give our youths in Sarawak a lot of opportunities and benefits if we all together can drive the vision and mission for this programme in the next three decades to come,” she elaborated . Present at the event were State Information Department Director Abang Sardon and a representative of Samarahan Resident Sayed Kadir Abdul Wahap.