Saturday, May 30
You are at:Home»News»Sarawak»Award-winning homestay to start ‘kampung-stay’ programme 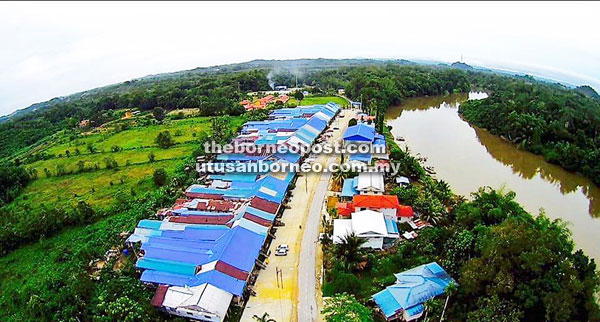 “The difference between homestay and kampung-stay is the guests do their own cooking and conduct their own activities,” homestay programme chairman Tuai Rumah Benjamin Angki Kaboy said.

“But they still can join activities held at the longhouse,” he added.

He told The Borneo Post this when met at his 65-door longhouse in Rantau Kemiding here on Saturday.

He said they already have a two-room chalet installed with an air-conditioner and a few other facilities, except the kitchen.

“We only need to provide kitchen for the guests to prepare their own food as per concept of kampung-stay.

“It will not be a problem to get approval from the Ministry of Tourism, Arts and Culture since we already have a homestay programme,” he said, adding they charged RM70 per room per night at the chalet.

Recently, three female visitors from the USA, Switzerland and Germany stayed two nights at the chalet under the homestay programme, he said.

Last year alone, he said they received a total of 2,784 visitors, 109 of whom were foreigners.

At one time, Angki said they hosted 350 persons consisting of Singaporeans, Taiwanese, Bruneians and West Malaysians who came in express boats.

He said most of them made day-trips and visitors mostly came during their annual Rantau Kemiding Festival.

This year, the festival is scheduled for Aug 31 to Sept 3, he said.

“For this year, a group of 20 persons from Johor have placed their bookings on June 1 and they planned to stay overnight here.

The homestay programme at Rumah Benjamin Angki started on Feb 8, 2011 with 14 doors of the longhouse including Angki participating.

The homestay was among five in the country given the Asean Homestay Standard awards in the award presentation held in Singapore in January this year.