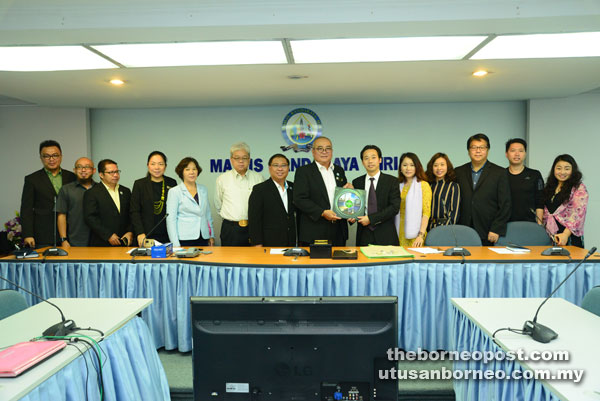 Yii (seventh right) presents a souvenir to Chen after the courtesy visit at the MCC chamber meeting room.

MIRI: The authorities would have to put in extra effort to develop Miri as a tourism city in order to catch up with the more popular Kuching city.

According to Mayor Adam Yii, years of planning for Miri’s tourism development had failed to become reality, owing to the lack of direct flights into Miri city.

“Direct flights can attract more tourists and travellers coming into Miri; it is convenient, time and energy-saving compared to transit flights. Hence, there is a need to propose to aviation companies to provide more direct flights into and out of Miri.

“At the moment, an alternative for international flights are Royal Brunei whereby tourists could arrive at Brunei International Airport before heading down to Miri city which is about two-hours away,” Yii said when welcoming China delegates on a courtesy visit to Miri City Council (MCC) yesterday.

On the existing tourism promotion in the city, Yii emphasised that there was a lot of work to be done, especially tourism activities.

Apart from the government’s effort, Yii said that the co-operation from the private sector was vital to ensure that tourism development plans could run smoothly.

He welcomed the China delegates from Shenzhen comprising more than 20 persons headed by chairman of The Global Business Club Chen Yu He.