Wednesday, August 5
You are at:Home»News»Court»Six Immigration officers plead not guilty to graft charges 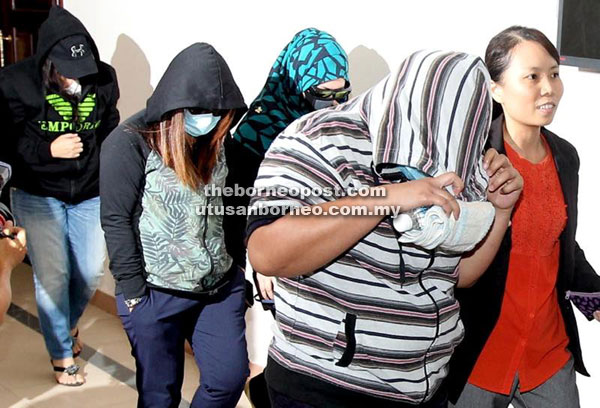 Some of the accused covering their faces as they walk out of the courtroom after the mention of the case.

They are charged under Section 165 of the Penal Code, which provides for imprisonment of up to two years or a fine, or both, upon conviction.

Gracy allegedly accepted a total of RM200 — RM100 each from Fazal Illahi Juma Gull on April 22 and Dec 25 last year at a bank in Kota Sentosa.

Norhaliza allegedly accepted RM600, made up of RM500 and RM100 from two separate transactions done on Dec 27 last year, and Jan 1 this year.

Benjamin and Agnes allegedly accepted RM200 each, while Khairul and Emily accepted RM1,000 and RM300, respectively.

The money, allegedly received via bank account transactions, is said to refrain them from taking action against illegal immigrants who did not possess valid travel documents or work permits.

Judge Nixon Kennedy Kumbong fixed April 28 for pre-trial case management and allowed all the accused to be released on bail of between RM5,000 and RM8,000, with one surety each.