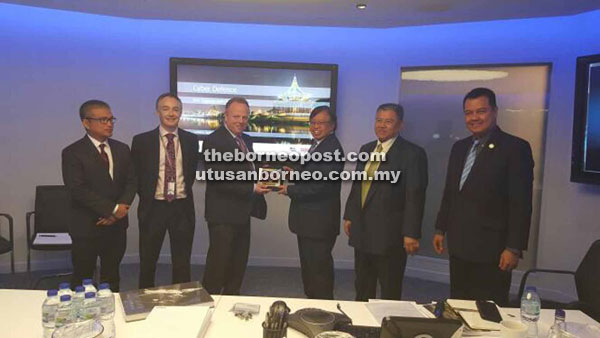 KUCHING: Chief Minister Datuk Amar Abang Johari Tun Openg said it is imperative for Sarawak to establish a cyber-security defence system in its quest to develop the state into a digital economy and become a digital powerhouse.

“To become a digital powerhouse, Sarawak must be shielded against cyber attacks to ensure our digital economy is safe, secured and reliable,” said Abang Johari after visiting the BAE Systems Corporation in London yesterday.

The Chief Minister, who is currently on a weeklong study tour in London, yesterday morning visited the BAE Systems headquarters in the British capital as part of his itinerary to gain better insights into cyber security defence system for nations and corporations.

BAE Systems Corporation has a worldwide reputation as a cyber-security provider.

“We must have a state-of-the-art cyber security defence system to insulate our systems from cyber attacks from outside as well as inside perpetrators,” he emphasised.

In the recent inaugural International ICT Infrastructure and Digital Economy Conference Sarawak (Idecs), Abang Johari had outlined the importance of Sarawak migrating from a traditional economy to digital economy in order to leapfrog its economic advancement that is very much in line with the current global trend.

In his keynote address during the conference, he stressed the need for Sarawak to establish a world-class, physical digital infrastructure that is sufficient to support a digital economy in the next five to 10 years.

In the same address, he said the plan to put a cyber defence security system in place in Sarawak is part of the roadmap which has a specific timeline and a dedicated agency, Sarawak Digital Economy Corporation, to ensure its wholesome implementation.

The Chief Minister and members of his delegation spent about an hour at the BAE Systems headquarters and later in the afternoon visited the Imperial College of London where they were given a briefing on the world-renowned cardiac treatment and research facility.

Tomorrow, the Chief Minister will attend a briefing by Canterbury Christchurch University and later a meeting with Brooke Dockyard Engineering Works Corporation and a partner company on marginal oil fields venture in waters off Sarawak.