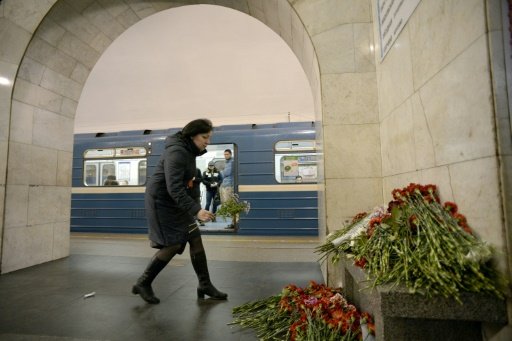 The FSB said it detained the man — named as Abror Azimov — on Monday in the Odintsovo suburb of Moscow, describing him as “originally from Central Asia,” in a statement quoted by RIA Novosti news agency.

The suspect has been taken for questioning to the Investigative Committee, which probes serious crimes, the FSB said.

The suspected suicide bomber has been named as 22-year-old Akbarjon Djalilov, who is thought to have been a Russian national born in Central Asian Kyrgyzstan.

Azimov, who was born in 1990, “carried out training of the suicide bomber terrorist Djalilov,” the FSB said, calling him “one of the organisers.”

Djalilov is suspected of triggering a homemade explosive device while on a train in a metro tunnel. Security forces said they safely defused another device left on a platform.

Eight were previously been detained in Moscow and Saint Petersburg over the bombing, with the head of the FSB Alexander Bortnikov saying last week they all came from Central Asia.

The attack has posed tough security questions as Russia gears up to host the opening game and final of the Confederations Cup football tournament in June, ahead of the World Cup in 2018.

After the bombing, President Vladimir Putin held talks with world leaders including US President Donald Trump to push for greater cooperation in the fight against terrorism.

The Kremlin has called the attack a “challenge to every Russian, including the head of state”. -AFP