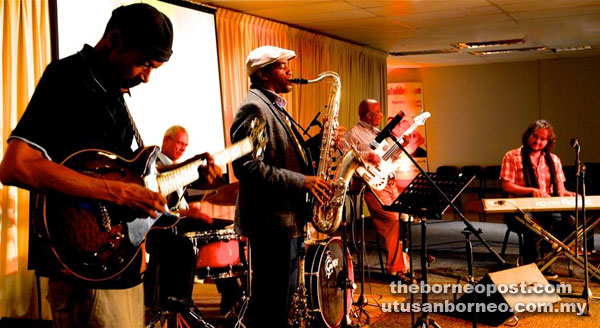 The Cape Jazz Band performing their ‘cape jazz’ during one of their gigs.

KUCHING: The Cape Jazz Band will be performing at the Borneo Jazz Festival at ParkCity Everly Hotel in Miri this May 12 and 13.

Fondly known as ‘The CJB’, the jazz band will be bringing a full brass section to the festival, performing their ‘cape jazz’ from Cape Town, South Africa.

With a special focus on brass and percussion instruments, they will be performing a fast paced, street carnival styled repertoire akin to that of the founders of Cape Jazz back in the early days of post-apartheid South Africa, according to a Sarawak Tourism Board (STB) press statement yesterday.

The CJB, which began in 2013 led by jazz drummer Jack Momple, has contributed to many of the most famous ‘cape jazz’ recordings.

Their album ‘Musical Democracy’ was released that same year and comprised original ‘cape jazz’ compositions by Momple and CJB members.

Their energetic, manic-celebratory style maintains the bottom line of ‘cape jazz’, that is freedom of expression through times of oppression, a message that no hurdle is insurmountable without hope, persistence and a little festivity.

Meanwhile, STB, who are the organisers of the Borneo Jazz Festival, said bands around the world such as from Japan, Netherlands, Guadeloupe, France, Italy, USA and Taiwan will be performing at the two-day festival.

This year’s festival will be expanding its musical outreach programme. Aspiring musicians can learn the basics of Jazz Keyboard from professional musicians with the introduction of additional classes for percussions.

It also includes night performances with sitting and dancing areas and a wide lawn for night picnics surrounded by arts, crafts and food stalls.

Pre-sale festival tickets are available now and more information can be found at www.jazzborneo.com.