Sunday, November 28
You are at:Home»News»Sarawak»Yii selected to attend YSEALI programme in USA 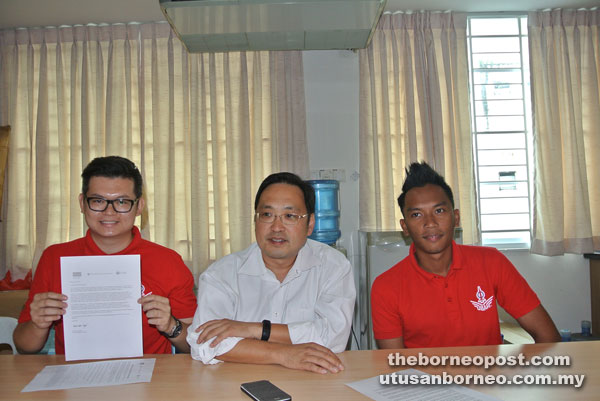 (From left) Yii shows the offer letter while Chong and his special assistant Abdul Aziz look on.

KUCHING: Kelvin Yii Lee Wuen who is a special assistant to state DAP chairman Chong Chieng Jen has been selected as one of four Malaysians and the only one from East Malaysia by The American Council of Young Political Leaders (ACYPL) to participate in the Young Southeast Asian Leaders Initiative Professional Fellows Programme (YSEALI) under the ‘Legislative Process and Government Programme’ in the USA.

To qualify for the programme, Yii had to write essays on pressing national issues affecting Malaysia and pass an interview.

He wrote about the degrading and lessening  democratic space in Malaysia.

“It is a tough selection process as only four out of thousands of young politicians were selected to represent Malaysia in the programme,” Chong told a press conference here yesterday.

ACYPL is a non-partisan, non-profit internationally recognised as a preeminent catalyst for introducing rising political and policy leaders to international affairs and with each other.

It is fully supported by the US Department of State Bureau of Educational and Cultural Affairs. ACYPL has a network of alumni in over 100 countries, many whom have risen to positions of national and international prominence.

“I am sure this programme will equip Yii with better knowledge and wider perspective on governance, political leadership and international relations and order.

“US is a federation like Malaysia, but unlike Malaysia which has an over-centralised power in the federal government, the US has a very comprehensive system of power devolution to all the respective states. Every state has autonomy in matters like education, policing, taxation and so on,” said Chong.

He said it would be a good case study and model for those in Sarawak fighting for autonomy and devolution of power by the federal government.

The only downside of this programme is that he will be required in the USA for a full five-week visit to Washington and many other states to study the legislative process and governance of the federal system and the different states.

“However, as DAP is committed to improve its members and representatives so that we can provide better service and direction for the people and the country, I am glad for Kelvin to have the opportunity to go to the USA while I have to make do without his assistance for the next five weeks till early June,” said Chong.

Yii, meanwhile, said he would, during his study visit, share with state DAP, his first-hand experience with the relevant US government departments and legislative bodies through emails of his press statements and reports twice a week.

“Our state has progressed to a level where politics is about government policies and governance.

“Politics is not only about begging for more development allocations for roads, drains and organising events, which seems to be the primary and only concern of the SUPP/BN leaders.”

Yii, 31, is a medical doctor who graduated from Volgograd State Medical University but left the medical line in 2012.

He has a Law Degree from University of London and is now pursuing Masters in Law at the University of Northumbria, Newcastle, UK.