Wednesday, September 23
You are at:Home»Lite Stories»Natural attractions draw visitors from near and far 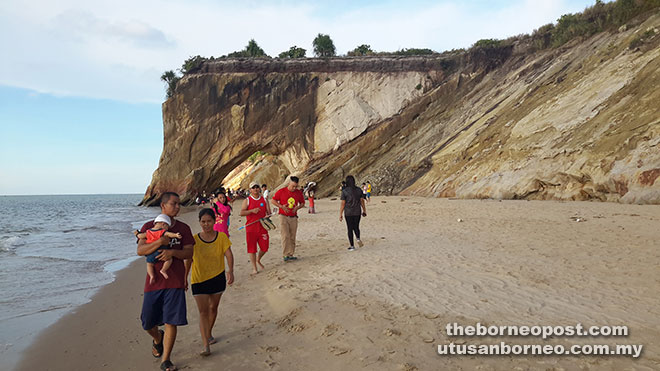 Visitors flocking to take pictures of the ‘Horse Stone’ formation which is said to look like a horse drinking water. 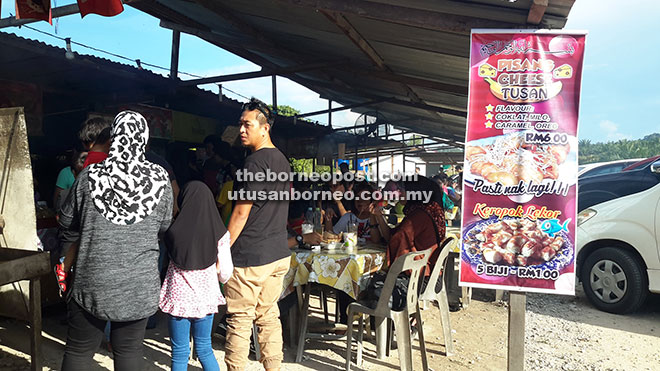 Stalls operators offering a variety of coconut shakes and drinks.

MIRI: Tusan Beach, located 40 kilometres from Miri, offers stunning sunsets and beautiful landscapes, including the cliffs of Tanjung Layang-Layang which has a unique natural formation known as “Horse Stone”, making it one of the top tourist destinations in Bekenu.

It draws foreign tourists, locals and even Bruneians who drive all the way from the sultanate to witness the natural wonders.

Other attractions in Tusan include several small caves and rock formations, a river stream, beachside stalls offering coconuts drinks and barbecued fare and a local music group performing on Sundays.

“More concrete efforts should be taken by the authority concerned to preserve the natural wonders like the rock formations which are the result of erosion or wind along the beach like at Tusan and Peliau beaches, and to provide guide services,” said visitor Awang Sapong Awang Pungut from Gadong, Brunei when met at the beach recently.

Awang Sapong, 30, said he came to know about Tusan Beach through social media where he saw photographs of its rock formations and the beach and eventually was motivated to visit to see the beautiful landscapes in person.

He said Tusan Beach is different from other beaches he has visited in Borneo including in Sabah and Brunei as it has rock sculptures and small caves formed by erosion.

He suggested that students should be brought on study tours to the beach, especially those studying geology to gain firsthand experience.

“Tusan offers stunning natural beauty which is the best in Sarawak so far,” he opined.

A local visitor from Miri, Abu Bakar, said the local music group performing every Sunday presented a variety of songs to entertain tourists enjoying the cool seaside breeze at the stalls there.

Other attractions, he said, included ‘kelapa bakar’ — a health drink made from coconut offered by a stall owner — apart from the Tusan ice-cream blend and coconut shakes which sell like hotcakes.

He noted Tusan Beach has become the latest hotspot among locals and an increasing number of tourists and visitors are visiting the beach, especially on weekends and public holidays, providing local villagers operating stalls there with extra income.

He added that photographers armed with various gadgets and lenses could often be seen trying to get the best shots of sunsets and rock landscapes along the Tusan beach up to Peliau beach.

Meanwhile, a local from Kampung Bungai said in the early 50’s, a road connecting Miri to Bekenu did not exist.

To get to Miri, villagers from Kampung Bungai, Peliau, Tusan and Beraya had to walk all the way along the beach, crossing a few rivers that were inhabited by crocodiles.

It would take them about a day to reach Miri to purchase food and other items needed, he disclosed.