Tuesday, June 15
You are at:Home»News»Court»Three jailed, fined for smuggling 700 birds to Indonesia 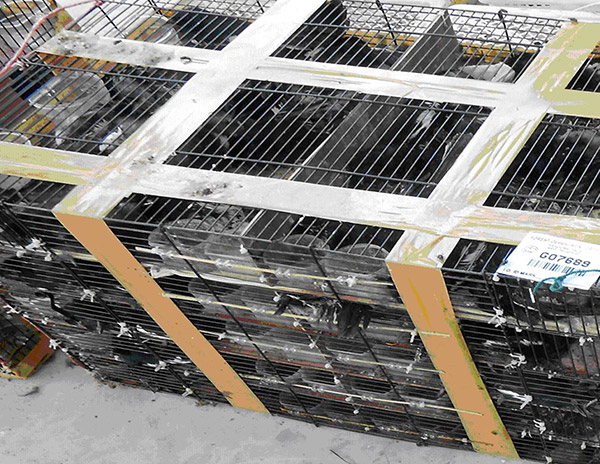 The birds inside a cage.

KUCHING: Two Indonesians and a local were sentenced to a year in jail and fined RM10,000 each for smuggling 700 White-Rumped Sharma (Burung Murai) into Indonesia.

They pleaded guilty at a Sri Aman magistrate’s court on Tuesday to committing the offence listed under the Wildlife Protection Ordinance 1998.

Wakiman and Siswanto were heading towards Indonesia when several Malaysian soldiers intercepted their 4WD vehicle near the border post on Jan 30. Siswanto was the driver.

The soldiers surrendered the duo to the Forest Department at Lubok Antu police station where they were remanded until the disposal of the case.

The local person was the owner of the 4WD vehicle which the two Indonesians had rented for use.

“The arrest and seizure of the birds show that the Forest Department is serious in enforcing laws against the smuggling of protected wildlife,” the department said through a press statement yesterday.

The department said it did not hesitate to take action on anybody, be they locals or foreigners.

However, they needed cooperation from members of the public and other government agencies to maintain law and order and to prevent the exploitation of the state’s protected wildlife.

The public may provide useful information to the department on any suspicious activity by calling their Hotline number 1-800-88-7777 or Talikhidmat Sarawak at  555999.

The 4WD vehicle used in the crime.