Saturday, August 15
You are at:Home»News»Sabah»Living legacy of Murut embroidery 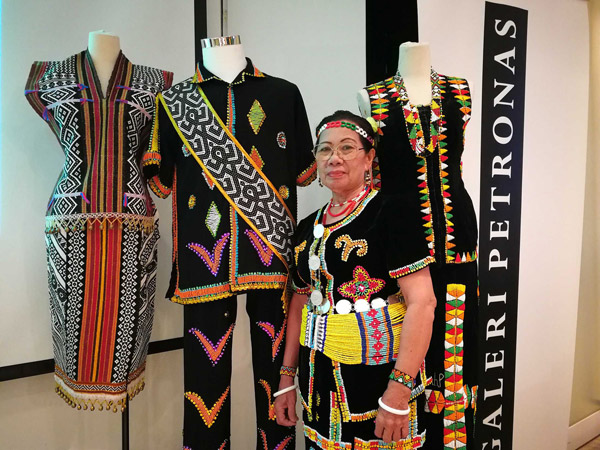 Murut Tangala traditional attire on display during the masterclass. It takes three months for Dainsing to sew a pair of this attire.

AT 72, Dainsing Darum, a master embroiderer from Sabah, is a picture of contentment.

“I have a lot to thank for,” she says. “Good health is one of them. Others are my eyesight, which has not deteriorated much despite my age, and my hands which remain steady.”

Dainsing, from Kampung Inarad, Tongod – a district located in the deep interior of Sabah – says that having good eyesight and steady hands have allowed her to remain active in pursuing her passion in embroidery, and in imparting the skills to the younger generation.

But underneath her chirpy nature, one cannot help but sense a hint of despair in her voice.

“Embroidery is something that I truly hold dear,” Dainsing told the participants of her embroidery masterclass at Galeri Petronas  in Kuala Lumpur recently. “It’s my soul; and I shudder to think what if someday this art is lost and forgotten. That’s why I’m here; I’m eager to impart this skill to anyone who wishes to learn.”

Her masterclass which consisted of embroidery, beadwork, and rattan weaving, took place from March 24 to 26 at Galeri Petronas  in Suria KLCC as part of the event line-up for the “MANAH: A Living Legacy” exhibition which ran from February 14 to April 16.

Manah is Galeri Petronas’ first exhibition for 2017. Curated by Associate Professor Dr Baharudin Arus from University Malaysia Sabah’s Faculty of Humanities, Art and Heritage, it features the artistic and creative expressions of Malaysia’s indigenous communities and their strong connection to the rainforest.

Manah, which means “ancient” or “old way” in the Temiar language, featured the unique aesthetics of the country’s indigenous people which remain intact despite the influences of modernity, to reflect their identity and origins which are strongly linked to the ecology of the land they inhabit.

Dainsing, who is from the Murut Tangala tribe, says she did not hesitate for a moment when Galeri Petronas invited her to conduct a masterclass during the exhibition.

“I’m thankful for the opportunity to spread awareness about our craft. Right now, I’m the only one left in my village who knows about the Murut Tangala embroidery. I’ve been trying for some time to pass down this skill and will continue to do so for as long as I can,” says Dainsing, a mother of one.

In his speech at the launch of the exhibition in February, Petronas chairman Tan Sri Sidek Hassan said Manah sought to re-represent indigenous aesthetics in a new context, challenging the notion of indigenous culture as something that is mysterious, inferior or backwards.

“There is so much that we can learn from the values and practices of indigenous people when it comes to global issues such as climate change, biodiversity loss and sustainable living. Their minimalist way of life is in itself a lesson in sustainability – a subject only recently given more prominence including by the corporate world. Petronas is proud to contribute towards enhancing traditional knowledge and a holistic culture,” he said.

Dainsing says she started learning about embroidery when she was 12, first by observing her aunt and later on copying her aunt’s works using banana leaves.

“But once I mastered the techniques, I improvised on them. The key is knowing the pattern and calculation, and where the needle should go next. The calculation must be correct from the first stitch or else, the whole piece will end up wrong,” she says.

Her commitment in preserving and promoting the craft saw her take part in numerous art and craft exhibitions in Sabah and Sarawak.

In September 2011, she participated in the Collaborative Exhibition and Weaving Workshop between Sabah and Indigenous Australia Weavers at Koorie Heritage Trust in Melbourne, Australia.

“The skills and motifs of the Murut Tangala embroidery are passed down from one generation to the next. Legend has it that my ancestor first learned embroidery and weaving by observing spiders spinning their webs in the wild,” says Dainsing, who has mastered over 40 intricate patterns, each steeped in symbolisms.

Pointing to a piece of embroidered garment, she says, “For instance, this wavy line pattern here depicts a snake, which symbolises cheating hearts. There is another that symbolises wisdom, which is represented by this round pattern, depicting full moon,” says Dainsing, whose masterclass attracted scores of artisans in the Klang Valley.

“Follow your heart, let the fabric dance with the needle,” she tells the participants.