Wednesday, August 12
You are at:Home»News»Sabah»Trilateral patrols set to begin 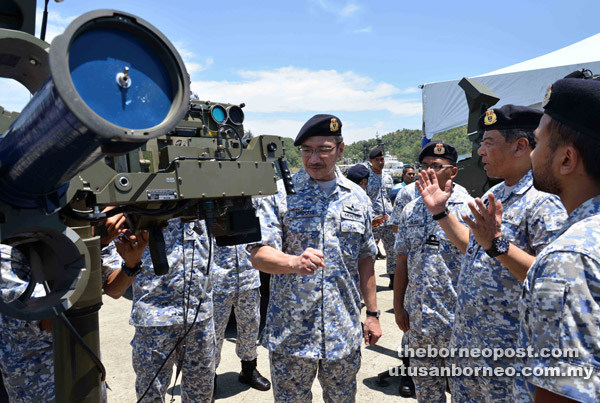 KOTA KINABALU: Joint air and sea patrols involving Malaysia, Indonesia and the Philippines to combat trans-border crimes and militant activities, will become a reality following a trilateral agreement between the three countries.

The trilateral cooperative arrangement will be launched by the three countries’ defence ministers in Bangao, Southern Philippines next month.

“The joint patrols involving all three countries are important to ensure our country’s waters, especially along the east coast, are free from any unwanted threats such as cross-border criminal activities,” he said after launching the Eastern and Western Fleet Command and the 83rd Navy Anniversary at the Sepanggar naval base, Sepanggar yesterday.

Hishammuddin, who is also Minister with Special Functions, said the launch for all three ceremonies would be held in the presence of defence ministers from the three countries.

The date of the events will be announced in the Philippines, while Sabah will launch the maritime projects and Indonesia for the air projects.

“This event is important for us as it shows that Malaysia, Indonesia and the Philippines are able to sit down together, with mutual understanding, to find ways to tackle maritime problems,” he said, adding that cooperation with the neighbouring countries would enhance maritime security.

Hishammuddin also said that the joint patrols were important to expose the Abu Sayyaf group which had pledged their allegiance to the Daesh group.

“We know Abu Sayyaf militants have sworn allegiance to the Islamic State, and we also know that those returning from Syria and Iraq have the intention of establishing ISIS caliphate in the country.

“This is not a theatrical act but a reality, and we need to take appropriate and proactive measure to combat this situation; but we also need the rakyat to give their full cooperation and I believe we can overcome it,” he said.