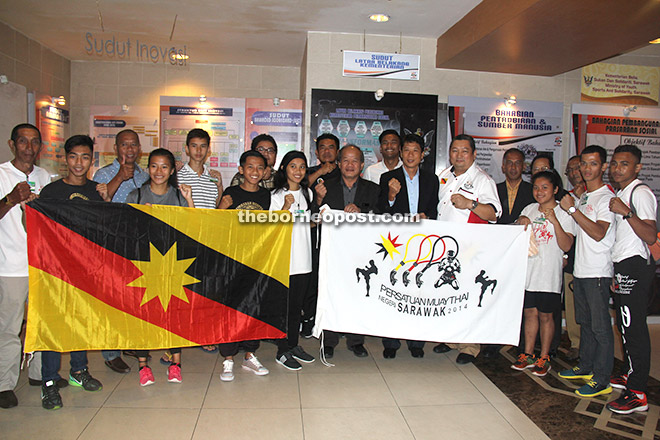 (Front row, from fourth right) Jumaat and Kameri pose with officials from the ministry, MSNS and the Sarawak team at the flag presentation.

KUCHING: The 3rd Borneo Cup Amateur Muaythai Championship will be a good exposure ground for the state muaythai fighters especially the juniors.

Persatuan Muaythai Sarawak (PMS) president Ibrahim Jumaat said Sarawak are sending 13 fighters to carry the state’s challenge at the championship at Maksak Hall in Kota Kinabalu, Sabah from May 6-7.

“Borneo Cup is the best exposure ground for our fighters because the participants are not only from the country but also from other countries.

“This will give them useful exposure as foreign fighters think and fight differently,” Jumaat said.

“I am also confident that the fighters who have trained very hard for this championship will show their true qualities,” he said at the flag presentation at his office at Bangunan Baitul Makmur on Friday.

“We do not want other teams from West Malaysia to win many medals. If possible, we want Sarawak to win many gold medals for us to be crowned overall champions again,” he challenged the squad.

The 3rd Borneo Cup will also be participated by teams from Labuan, Brunei and Indonesia.