Saturday, October 8
You are at:Home»Columns»Nature Matters»And then there were only three! 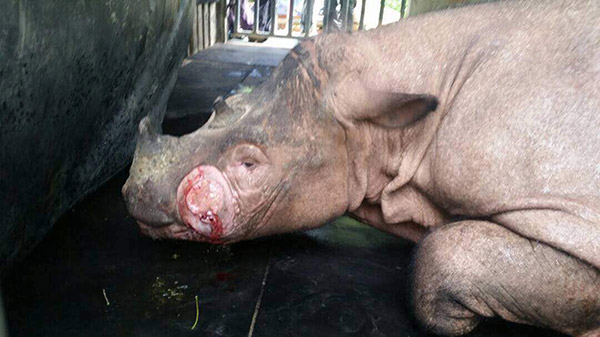 The abscess on Puntung’s upper jaw. — Photos from the Sabah Wildlife Department

THE plight of Puntung, one of the very few surviving Sumatran rhinoceroses in Malaysia, was highlighted in the press earlier this month. Sadly, she had an abscess, deep within her upper jaw, which prevented her from eating.

Normally she would consume as much as 30kg of leaves and saplings daily.

Sharing an enclosure with Iman, another female rhino, and Tam, a male rhino, it is hoped that through the collection and storage of skin cells from these three remaining species of rhino may, in the fullness of time, allow the lineage to continue.

Whilst Sumatran rhinos are now extinct in the wild in Sabah, these three in captivity provide some hope. Unfortunately, these two females at the Borneo Rhino Sanctuary in the Tabin Wildlife Reserve near Lahad Datu, in eastern Sabah, are unable to breed owing to cysts on their ovaries.

This rhino sanctuary is funded by the NGO Borneo Rhino Alliance, which relies on public funding through donations.

Sometimes known as the hairy rhinoceros, this is the smallest of the Rhinocerotidae family with average measurements of 129 centimetres in height and a body length of 277 centimetres. Its tail is 52 centimetres long with a hairy tuft, like a fly whisk, at the end.

The larger nasal horn averages 20 centimetres in length, with a smaller horn, referred to as the stub, at only less than 10 centimetres.

Like the woolly rhino, which went extinct 10,000 years ago, the Sumatran rhino too has a coat of reddish brown hair. In fact, there are three subspecies of Sumatran rhino but only two species may still be found in Borneo and Indonesia.

The Western Sumatran rhino population has fallen to an estimated 80 animals and is now found only in Sumatra. Once found roving Peninsular Malaysia, it became extinct there two years ago.

The Bornean or Eastern Sumatran rhino is appropriately named Dicerorhinus harrisoni in memory of the late Tom Harrison (Sarawak Museum curator: 1947 to 1966).

Smaller in size than the other two subspecies, there are but three at the aforementioned sanctuary in Sabah with another 15 in the wild in East Kalimantan.

Both subspecies are pretty agile and fast moving animals living in highland and lowland secondary rainforests, cloud forests and in marshlands. From July to September 1854, whilst the famous naturalist Arthur Russel Wallace was exploring the lower slopes of Mount Ophir in the Malacca region, he reported seeing rhino tracks and that one of his team did spot a rhino. Because of their solitary nature they are, indeed, difficult to spot. 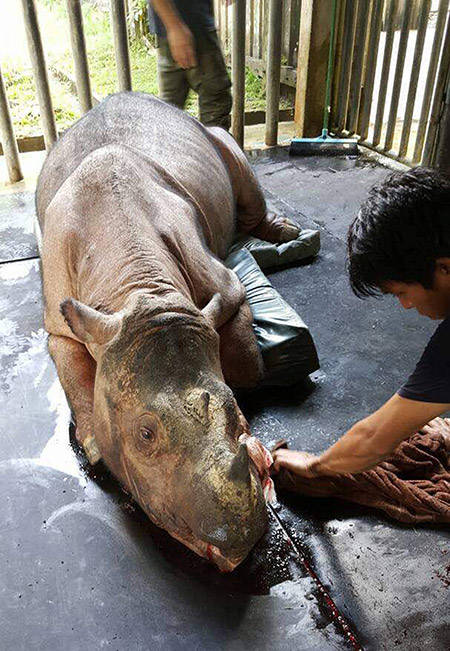 Treatment has to be carried out regularly to ensure that the abscess heals.

Pairings are only really seen during mating and rearing times. They mark their territories by twisting inedible saplings into intricate patterns, excreting, and scraping the soil with their feet.

They have been glimpsed at feeding times at dawn and just before nightfall and also in the midday heat as they wallow in mud-baths in an attempt to cool down. It is thought that their mud dips destroy ticks and keeps them clear of the blood disease surra, spread by horse-flies.

Female rhinos reach sexual maturity at about six years of age whereas it takes males another four years to reach that level of maturity. With a gestation period of 15 months, a single calf weighing 50kg is born. After 15 months, the calf is weaned and stays with its mother for the next two to three years.

These rhinos are folivores – eagerly devouring leaves, saplings, shoots and twigs to the tune of 50kg each day.

By studying rhino dung samples, the greatest proportion of its diet is derived from tree saplings. This diet is high in fibre and only contains a relatively moderate amount of protein. Where salt licks are available at hot springs, mud volcanoes or salty water, its diet is thus supplemented.

The most common form of intercommunication is by a one-second yelp – ‘eep’! The ‘whale’ sound is not unlike that of the humpback whale, sounding melodious and lasting for five seconds. The ‘whistle blow’ is a short two-second burst followed by a gulp of air and then repeated several times. This is the loudest form of communication and it can carry over a distance of several kilometres.

Sumatran (Bornean) rhinos and their offspring have no real predators other than mankind, either through poaching for the illegal ivory sellers or through the destruction of their natural hardwood rainforest environment.

At current black market prices, rhino horn can fetch up to RM132,000 per kg. It is possible, because of its distinctly few numbers, that interbreeding is also a factor leading to the demise of these species.

Whilst only a relatively few Sumatran rhinos exist in captivity with short life spans occasioned by their enclosed environments and diseases, it is hoped that in such places as the Maliau Basin Conservation area in the heart of Borneo there may be, as yet, an undiscovered population of these small but magnificent animals. Only history will tell.

In the meantime, do try to help the Borneo Rhino Alliance in its endeavours at Tabin Wildlife Reserve to allow the remaining three rhinos in both Sabah and Sarawak to live out their lives in peace and in harmony with their keepers. 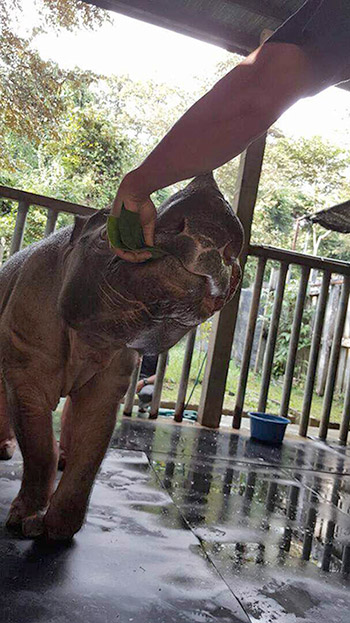 Puntung is slowly recovering from her injury, thanks to her handlers.