Sunday, January 29
You are at:Home»News»Sarawak»Kapit Dayaks a resilient lot — Masing
For the freshest news, join The Borneo Post's Telegram Channel and The Borneo Post on Newswav. 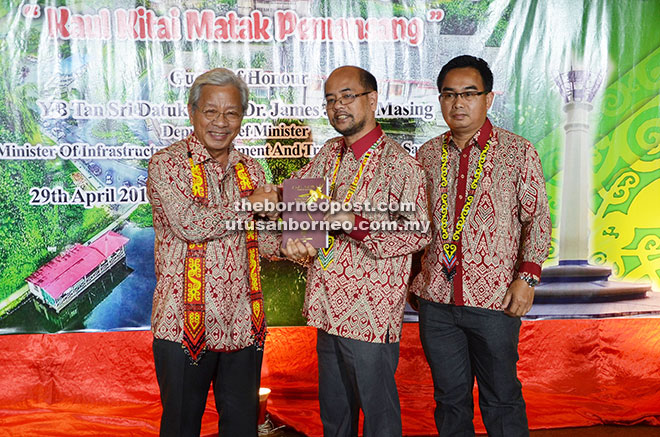 Masing (left) receives a book from Ugak (centre) during the dinner.

KUCHING: The Kapit Dayak community, especially Ibans from the division are reminded to work closely with other communities from other divisions if they want to be respected.

According to Deputy Chief Minister Tan Sri Datuk Amar Dr James Masing, it was high time that the community thought of other communities especially when organising activities as that had always been one of ways for the Dayaks in Kapit to be respected by others.

“Being friendly with others will also benefit the Kapit Dayaks as it will bring development back to Kapit.”

Masing said Kapit Dayaks were found almost everywhere in the country, and even in neighbouring countries.

“One of the reasons for this is that they are very mobile. They can live anywhere due to their resilience.

“Having many of them living elsewhere is more or less contributing to the development of Kapit,” he said during a Mantar Gawai dinner organised by Kapit Dayaks at Crown Square last Saturday. He was the  guest-of-honour.

Masing, however, hoped that other Dayak communities in the state were not envious and felt left out everytime the Dayaks from Kapit had their activities held outside of Kapit.

He also said when the Kapit Dayaks were united they would then be able to help other communities as that was their character.

During the dinner, Masing also received a book on Gawai celebration from the dinner’s organising chairman Ugak Nyun.