Wednesday, February 1
You are at:Home»News»Sarawak»Wan Junaidi says no repeat of 2015 haze this year
For the freshest news, join The Borneo Post's Telegram Channel and The Borneo Post on Newswav. 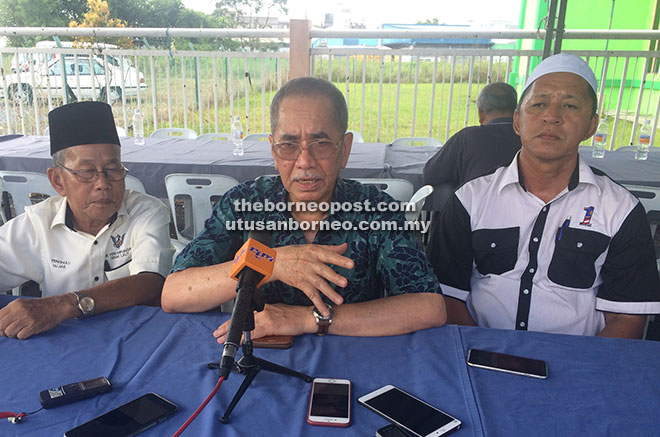 Wan Junaidi (centre) fields questions from reporters at the gathering.

KUCHING: Malaysia can afford a cautious sigh of relief as Indonesia has given their assurance that the haze of 2015 will not make a repeat performance this year.

Minister of Natural Resources and Environment Dato Sri Wan Junaidi Tuanku Jaafar said he had a lengthy discussion with the governor of Central Sumatra recently, and was assured that they were ready and confident on their capacity to put out any fires.

“I was also informed that all local authorities were warned to take action quickly,” he said, adding that in 2015, Indonesia deployed 3,000 police and army personnel to deal with the matter.

He told reporters this during an afternoon tea and get-together with community leaders and PBB Tabuan Melayu outside of Surau Darul Hajat in Kampung Tabuan Hilir yesterday.

Wan Junaidi, who is also Santubong MP, added that Malaysia was ready to send help should our neighbour needed it.

He also said the distribution of rain this year would be medium and no drought.

On another matter, he said Kampung Goebilt would get a new culvert before the flood starts.

“The current one is damaged. A total of RM200,000 has been approved by the federal Drainage and Irrigation Department (DID),” he said.

“With this, I hope the problem of flash floods will be a thing of the past for the villagers,” he said.

Penghulu Jas Said of Kpg Tabuan Melayu was also present at the gathering.