Sunday, October 17
You are at:Home»World»‘No chance’ for trapped Iran miner 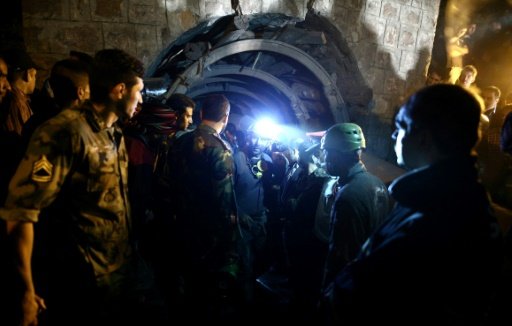 Coal miners and rescue workers gather on May 4, 2017, at a mine in Azadshahr, northern Iran, following an explosion that left dozens of miners trapped -AFP photo

TEHRAN: Iranian officials said Friday there was “no chance” of saving nine coal miners trapped for the past two days after a tunnel collapse that has already claimed at least 26 lives.

Toxic gases have filled much of the two-kilometre (mile) Zemestan Yort mine in northern Iran, and rescue workers face a painstaking effort to clear the fragile passage in which the remaining workers were trapped after a huge explosion.

“There is no chance of workers being alive in the mine,” said Deputy Interior Minister Esmail Nadjar, quoted by the ILNA news agency.

Concentrated methane gas exploded some 700 metres (yards) deep into the narrow mine in Azadshahr, Golestan province when workers tried to jump-start a locomotive engine using an external battery, officials said.

Three parts of the mine collapsed, and many of the dead are thought to be miners who rushed in to help their colleagues after the explosion.

Casualty numbers have changed several times since the Wednesday explosion as some workers were unregistered day-labourers.

Sadegh Ali Moghadam, director of the provincial crisis management office, told the ISNA news agency that rescue teams had passed the first blockage but were slowed by a huge boulder that had to be broken up.

A local official said damaged metal frames also had to be removed carefully to avoid another explosion.

The mine will be completely shut for six months until an investigation ordered by President Hassan Rouhani is completed.