Sunday, August 9
You are at:Home»News»Sarawak»STU has role in development of education and nation-building 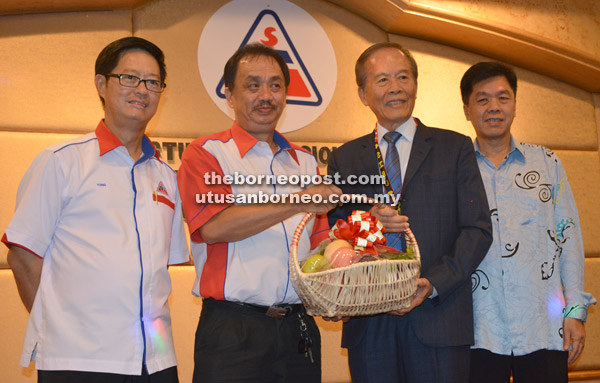 Tan (second left) presents a token of appreciation to Tiong while (from left) Yong and Chong Kung look on.

SIBU: Sarawak Teachers’ Union (STU), the second largest union in Malaysia with over 26,000 members, plays an important role in the development of education and nation-building.

Dudong assemblyman Datuk Tiong Thai King, who is also Sibu Municipal Council (SMC) chairman, said STU would continue to be needed so long as they speak on behalf of the rights and dignity of teachers, support professionalism in teaching and the essentials of good education.

“STU plays an important role in the development of education in the state and country. It is the second largest union in Malaysia with more than 26,000 members from all corners of Sarawak.

“Sibu alone has more than 3,000 members, ranking second in terms of membership in Sarawak. STU has contributed greatly to nation-building,” he said.

Tiong said the union also struggled for the welfare and well-being of members both while in service and after service. He recalled that teachers joined the union as unity is strength.

Appreciating the sacrifices of teachers, he likened them to a beacon that shone for others. The country required human capital to become a developed nation.

Some 500 members from Sibu, Selangau and Kanowit attended the function.

A total of 40 STU Sibu Division retired members were presented with souvenirs and academic incentives were given to members’ children who had excelled in last year’s public examinations.

At the same function, Tiong announced a Minor Rural Project (MRP) grant of RM5,000 from him, and a RM10,000 grant from Soon Koh.