Tuesday, February 7
You are at:Home»News»Sabah»Illegal 4D operations affect our business – Sports Toto
For the freshest news, join The Borneo Post's Telegram Channel and The Borneo Post on Newswav. 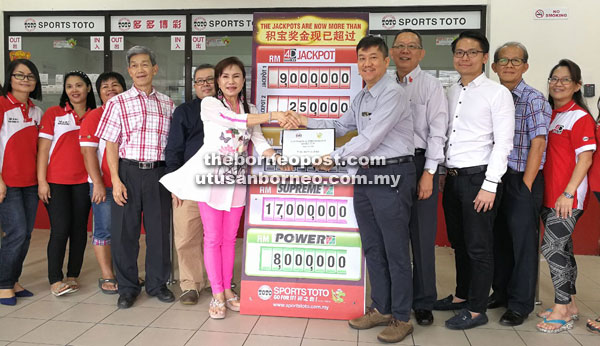 KOTA KINABALU: Four-digit (4D) punters in the state have been urged to boycott illegal four-digit operators and to support the legitimate operators.

“It is important that 4D punters continue to support legitimate 4D operators like us, so that we could continue to plough back part of our earnings to the society though our Corporate Social Responsibility (CSR) programs, besides contributing to the government coffers,” said Lee.

He cited for example, every year Sports Toto contributed 10 percent of its net profit, which was estimated around RM50 million, to the National Sports Council (NSC). In the case of Sabah, each year the company gave RM1.2 million worth of ang pow to the needy during the Chinese New Year celebration period through its eight distribution centers in the state.

“Frankly speaking, our business had been badly affected by the illegal 4D operations over the years, and this inevitably poses quite a challenge for us to increase the budget for our CSR programs,” he lamented.

Lee further noted that the 4D punters’ continued support of the illegal 4D operators had also indirectly contributed to social ills like violence (due to business rivalry and turf wars) and corruption in our society.

“Police records showed that some of the illegal 4D runners were as young as 13 years old. It is important that 4D punters understand the far-reaching consequences of supporting the illegal 4D operators,” he said.

Meanwhile, Lina thanked Sports Toto for recognising the efforts and contributions of her team of staff in boosting the company’s sales through their dedicated service to the customers. Besides this, she also thanked her team of staff and customers for their continuous support.

Lina also noted that a majority of its customers were loyal customers who had been supporting her outlet since it was established in 1986.

The outlet suffered a temporary setback when it was completely destroyed by fire on 30 March, 2013. It took close to three months to rebuild and to resume operations.

Besides receiving the award in the form of a plaque, Lina was also presented with a cash reward of RM6,000 while each of her staff received RM300 each, from the company.

Her outlet was among the six recipients of the said award nationwide.