Sunday, October 2
You are at:Home»News»Sarawak»PBPM Sarawak strives to look after welfare of ex-cops 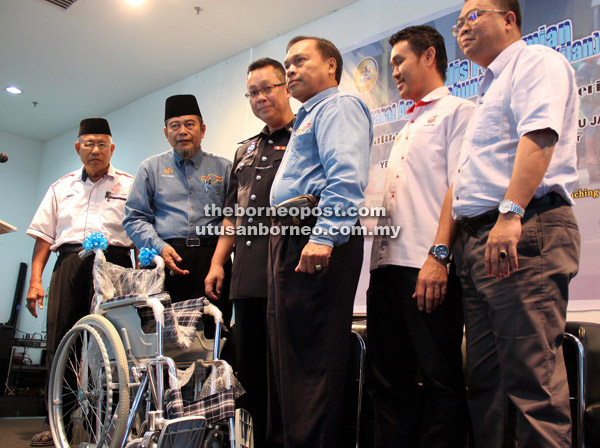 Subri (second left) hands over the wheelchair to Liew (third right), as others look on.

KUCHING: The state Ex-Police Association of Malaysia (PBPM) strives to be relevant in serving not only its members but also the local communities where they serve in.

According to PBPM Sarawak chairman Subri Aman, the association currently has 10 branches across the state and it is now in the process of setting up another branch in Betong.

“We believe that these branches can help deliver the association’s goals, especially in empowering former police personnel, assisting them in their welfare and at the same time, ensuring that the association would remain relevant,” he spoke at the start of PBPM Sarawak’s annual general meeting (AGM) at Dormani Hotel here yesterday.

On another issue, Subri said the presentation of medals to former police personnel who served during the Confrontation era as well as the government’s assistance of RM1,000 and RM3,000, had been put on hold, not stopped as many thought.

“Based on the information that we have received, it (presentation of medals and cash assistance) is put on hold; it will resume in the future,” he said, reminding all PBPM branch chiefs to inform their members about this.

“The police legacy trust fund is slated for helping their families especially in handling funerals, for education fund, medical expenses, as well as for relief aid during natural disasters,” he said.

James also advised PBPM to contact the IPDs of their respective areas should they need any assistance.

“We assure you that the ex-policemen will never be neglected in terms of their welfare.”

At present, PBPM Sarawak has about 10,000 members across the state.