Friday, July 10
You are at:Home»News»Sarawak»Emulate your counterparts in Kuching, Dayak leaders urged 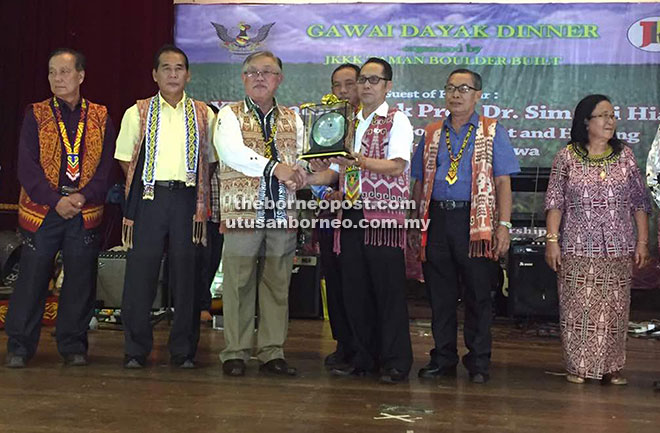 Sikie (third left) accepts a memento from Spencer at the event.

KUCHING: Dayak community leaders across the state should emulate their counterparts here when it comes to organising activities aimed at promoting unity.

According to Assistant Minister of Native Laws and Customs Datuk John Sikie Tayai, the Dayak community leaders in the state capital have this custom of holding annual events such as dinners that gather members of the community.

“They (Dayak community leaders in Kuching) have done a fine job in running more activities together as they realise that being united would promote closer rapport between the members (of the community).

“Through working together as a united community, any development programmes here will be successful too,” he said at a pre-Gawai dinner hosted by Taman Boulder Built Neighbourhood Security and Development Committees (JKKK) at the Christian Ecumenical Centre here on Saturday, where Batu Kitang assemblyman Lo Khere Chiang, Pemanca John Tambie Awat and Taman Boulder Built Iban community leader Spencer Birai were also present.

Adding on, Sikie stressed that unity and harmony that the country have today must never be taken for granted; instead, they should be further strengthened and continued for the next generation.

“Unity is a matter of paramount importance – it holds a promise of a better future for the Dayaks.

“Unity is also the basis of our progress.”

Later, Sikie pledged a sum of RM10,000 to Taman Boulder Built JKKK for them to run future activities – followed by Lo who announced an allocation of RM3,000 for the committee as well.

Previous ArticleBorneo Jazz 2017 ends on high note — thanks to volunteers
Next Article No warning before tree fell on us, says injured student