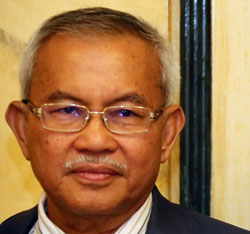 THE state government emphasises integrity among its employees who are required to declare their assets every five years, which is also a part of requirements for promotion.

Minister in the Chief Minister’s Office (Integrity and Ombudsman) Datuk Talib  Zulpilip, in stating this said the state civil service has six core values, and integrity is the  number one value.

“To ensure the state civil service recruits only the best talent with high sense of value  and integrity and character, the government adopts a competitive and transparent five-phase  recruitment process.

“Academic excellence alone is not enough. Applicants who pass through the first three phases – academic screening, language proficiency test and assessment centre assessment – have to undergo a  psychological profiling assessment before they are accepted for job interviews.

“Job applicants also undergo insolvency screening. Job applicants must then verify their  particulars by a declaration before a Commissioner for Oath,” he said in his ministry’s winding-up speech yesterday.

Talib said during the 30-day pre-service induction programme, also known as on-boarding  programme, prior to emplacement in the service, the successful recruits are given series of  activities and lectures to internalise the six shared values.

“Officers are screened by the relevant authorities to ensure there is no conviction against them in court before they can be considered for promotion. They also need to declare the status of their education loans, if any, to ensure they do not default on any of  their financial commitments.”

He said the state civil service had already implemented a good system to ensure integrity among its employees.

“However, we believe the situation in the state can still be improved, and that is why the chief minister has decided to raise the integrity function to a ministerial  level.”

When asked by Chong Chieng Jen (DAP-Kota Sentosa) if the state government was prepared to ask ministers, assistant ministers and heads of departments to make public declaration of assets, Talib said: “It will be decided.”

As a new portfolio that is still searching for an office, Talib said he could only describe in general the functions of Integrity and Ombudsman.

As an immediate initiative, Talib said the government would conduct engagement sessions with various enforcement agencies at both federal and state levels, and with relevant non-governmental organisations (NGOs) and civil societies in order to develop detailed terms of reference for the new function.

“We will also conduct roadshows throughout the state to promote this new function in the state administration.”