Saturday, May 28
You are at:Home»News»Sarawak»War of words as Wong and Chong debate in DUN sitting 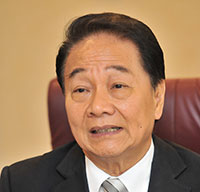 Wong said all loans and loan guarantees had been laid on the table while all details of the agreement on borrowings by the state government had been tabled in the State Legislative Assembly (DUN) accordingly.

“In respect to the two offshore loans that were obtained by a special purpose vehicle as mentioned by Kota Sentosa, the details of these loans have been disclosed accordingly in the audited financial statements of the Government Contributions Towards the Approved Agencies Trust Fund.

“The financial statements of the trust fund were duly audited by the Auditor General (AG) Malaysia on an annual basis and duly certified. And these two offshore loans are not guaranteed by the state government,” he said before concluding his winding up speech.

Chong immediately sought a point of clarification by pointing out that the state government had approved a fund of approximately one billion to cover the loans for the fund to be allocated into the trust fund called Government Contributions Towards Approved Agencies Trust Fund.

“Isn’t that guarantee by the government? As mentioned by the Honorable Minister that the audited reports of this Government Contributions Towards Approved Agencies Trust Fund. Those reports audited by the AG were not tabled in this House.”

He added that what had been tabled in the DUN sitting was a one-page report which contained amount brought forward, amount entered, amount out and amount carried forward.

He described such report as “ridiculous, simplified, insufficient and non-transparent”.

“Can we have the government table the fully audited financial reports in respect of the trust fund? In the report tabled last week, there is a clear indication as to where the money will be utilised. Why is it that the offshore loans to Equisar and SSG that amount to USD 1.6 billion were not included in the report which includes loan guarantees?

“If there is no guarantee by the state government, why are we annually approving a sum of more than one billion into those accounts?” raised Chong.

In his defence, Chong said: “I don’t want to insinuate any bad intent. But the fact is that he (Wong) had failed to table the accounts in this House.”

“Any reasonable and responsible law-makers cannot help but draw the conclusion that there is something to hide on the part of the administration in respect of the whereabouts of this fund and where it is to be disbursed.”

Wong then assured the august House that “we do have provision to appropriate fund” to ensure that the state had sufficient funds to meet its commitment.

“It does not mean the state government has to guarantee, no. We merely provide enough fund to meet our commitment. I’d like to say that we manage our financial fund through proper procedure and financial compliance, in the comprehensive and thorough disclosure and documents presented before the assembly.

“In other words, we will always be conscious of our responsibility and public accountability and I’d like to assure Kota Sentosa that we have all the financial discipline and prudence in utilising public funds,” added the minister.

Chong still refused to go silent and so the Deputy Speaker reiterated his ruling: “I think the minister has said that the government complied with all relevant statutory provisions.”

Wong then proceeded with his winding up speech after being requested by Gerawat to do so.