Friday, May 20
You are at:Home»News»Sarawak»Work to start on Bau District Office’s new complex in July 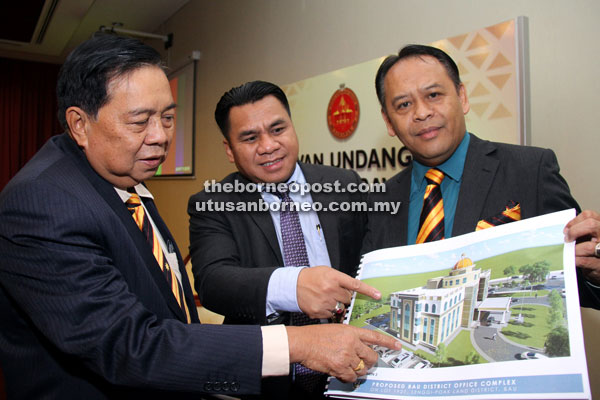 Henry (right) with Ranum (left) and Miro display a picture showing an artist’s impression of the new office complex.

Tasik Biru assemblyman Datuk Henry Harry Jinep revealed that Chief Minister Datuk Amar Abang Johari Tun Openg is expected to perform the earth-breaking to launch the construction of the new complex at 10am on July 15.

“The three-storey complex to be built at the existing unused police bungalow in Bau is expected to take 24 months to complete,” he told a press conference after leading an entourage from Bau District Council (BDC) to pay a courtesy call on the chief minister at his office in the DUN Building here yesterday.

Henry pointed out that the new complex was important as the old colonial District Office, which is nearly 86 years old, can no longer accommodate the needs of the growing population and more importantly, technological infrastructure for efficient service delivery.

“This new complex is in line with efforts to move Sarawak into the digital economy,” he said.

As for the old building, Henry shared that it could be used as a Mother and Child Clinic to ease congestion at the current hospital.

“We don’t want to demolish these old buildings because they are a heritage of Bau. Also the old police bungalow where the new complex will be built will be maintained for other suitable purpose,” he said.

The earthbreaking ceremony will coincide with BDC’s 60th anniversary celebration and opening of Tasik Biru Festival.

Miro thanked the chief minister for his support, including financial, for the success of Siniawan Festival to take place from Aug 18 to 20.

“The federal government has approved a RM1.6 million allocation to develop the Brooke Heritage site at Bukit Serembu as well as for the improvement of Siniawan heritage town,” he added.