Tuesday, February 7
You are at:Home»News»Sarawak»Abavuki and Kelele from South Africa to perform at 20th RWMF in July
For the freshest news, join The Borneo Post's Telegram Channel and The Borneo Post on Newswav. 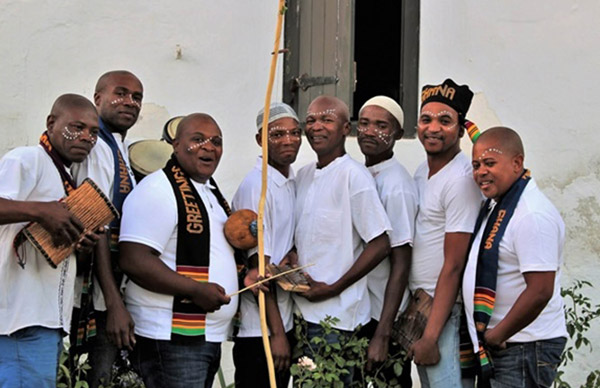 Members of Kelele from South Africa.

Abavuki, which means ‘Wake up, early birds!’ in the Xhosa language, provides energetic and multi-instrumental performances which mix traditional rhythms of the South African people as well as more modern styles of kwaito, samba and Jazz.

Founded in 2001 and based in Cape Town, Abavuki’s high-energy afro-beat music reflects their optimistic outlook on life, music-making and the resilience of the South African people.

Their albums are Decade, Live in China and African rhythms.

Kelele is a minimal-instrument band with their voices as the focal instrument.

Keeping traditions alive with their melody and harmony, Kelele maintains the age-old African oral tradition of storytelling through song, passing on history, folktales and lessons in life over generations.

Their music is accompanied by traditional instruments like the mbira dzavha dzimu (the finger piano), the uhadi (traditional bow instrument of the AbeXhosa people), the umrhubhe (another bowed instrument) and the talking drum of the Nigerian Yoruba people.

South Africa is a country on the southernmost point of the African continent, with a multi-ethnic population overflowing with diverse language and culture.

Catch these performers at the RWMF which will be held on July 14-16 at Sarawak Cultural Village.

The festival will kick off with three days of all-day entertainment including mini music sessions, health and wellness activities, food and craft markets, traditional games as well as the nightly performances.

Sarawak Cultural Village, the venue of the festival, is popularly known as the ‘living’ museum which takes up a sprawling 17 acres of land at the foot of Mount Santubong, roughly 35km north of Kuching.

Festival tickets and updates are now available online or from the ticketing agents listed at www.rwmf.net, with pre-sale prices available until July 13.