Wednesday, May 27
You are at:Home»Lite Stories»King Tut’s bed, chariot to be moved to new Cairo museum 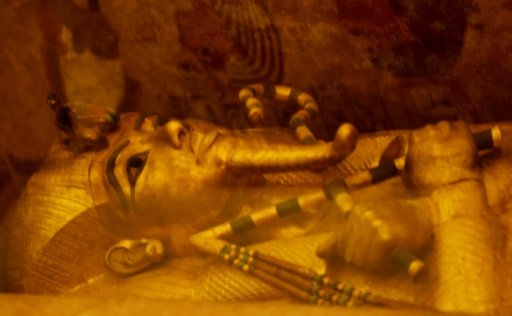 A picture taken on April 1, 2016, shows the golden sarcophagus of King Tutankhamun displayed in his burial chamber in the Valley of the Kings, close to Luxor. AFP file photo

CAIRO: The chariot of king Tutankhamun will roll through the Egyptian capital’s streets on Tuesday, only on the back of a truck as curators transport it to its new home near the Giza Pyramids.

The wooden chariot will be joined by one of the boy-king’s three funerary beds that were on display in the Cairo museum and are being relocated to the Grand Egyptian Museum near the pyramids.

The gilded bed features posts made of carved lion heads, representing Sekhmet, the goddess of war and healing.

But it may take some time for the priceless relics to be viewed again by the public.

The Grand Egyptian Museum had been scheduled to open in 2015, but construction has lagged as expenses mounted to more than $1 billion.

The museum is now scheduled to open partially in 2018.

The vast complex will house more than 100,000 relics including the 4,500 pieces of Tutankhamun’s treasure discovered in 1922 in the southern Valley of the Kings in Luxor.

But the young pharaoh’s mummy will remain in his tomb as it is too fragile to transport. – AFP