Thursday, July 7
You are at:Home»News»Sarawak»Dr Rundi now Minister of Utilities 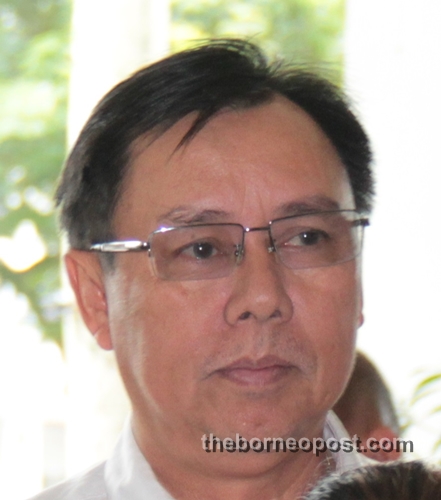 MIRI: BN Secretary-General and Kemena assemblyman Dato Sri Dr Stephen Rundi Utom is now the state Minister of Utilities, instead of the Minister of Rural Electricity and Water Supply.

He said Chief Minister Datuk Amar Abang Johari Tun Openg had decided to change it to reflect the wider scope of utilities under the purview of the ministry.

He explained that the chief minister decided the new nomenclature would replace Minister of Rural Electricity and Water Supply, as gas supply and distribution and other utilities also fall under the scope of this ministry.

“This change is immediate and would be official when it is gazetted, as the Minister of Rural Electricity and Water Supply is not yet gazetted,” he said.

He revealed this when met by reporters after officiating the dividends presentation ceremony of Niamas Istimewa Sdn Bhd to its joint-venture stakeholders from Rumah Changgai Dali and Rumah Belilie Lium of UIu Niah at a local hotel here yesterday.

Dr Rundi was formerly the Minister of Public Utilities before the last cabinet reshuffle.

He said the ministry does not only oversee rural electricity and water supply but also cities and urban centres apart from gas supply.

Abang Johari reshuffled his cabinet on May 6.

Previous ArticleGeely to own 49.9 per cent of Proton
Next Article MACC takes robust and aggressive approach in tackling corruption