Thursday, February 2
You are at:Home»News»Sarawak»Leo Club members potential ‘agents of change’ – CM
For the freshest news, join The Borneo Post's Telegram Channel and The Borneo Post on Newswav. 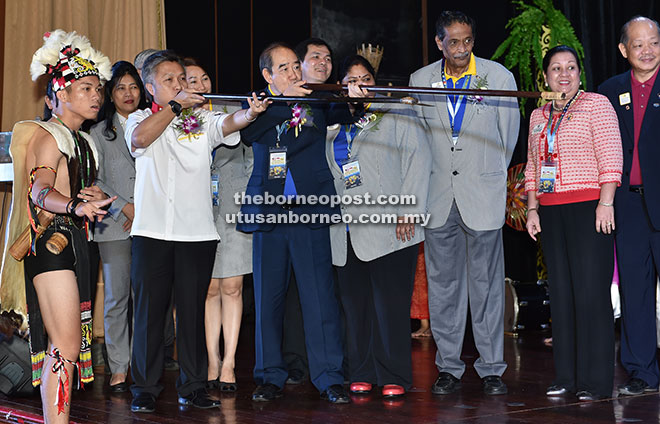 Through the various activities offered in the programme, he highlighted that members would be able to learn to be responsible members of their communities while developing valuable leadership skills.

“The experience that you go through now will serve you well in the future when you become the leaders of tomorrow,” he said in a text speech read by Assistant Minister of Youth and Sports Snowdan Lawan during the launch of the 44th Multiple District 308 Leo Forum 2017 held here yesterday.

“To all the Leos here, I hope you make full use of the opportunities given for development. As a member of the Leo Club, I am happy that you are helping to take care of some of the less-privileged people in our community.”

Besides this, Abang Johari also commended the large number of students who were part of the forum’s organising committee which was themed ‘One Heart One Mind’ to represent the Lions and Leos’ dedication of service to the community.

For this year’s Leo Forum, 12 Lions Clubs and ten school-based Leo Clubs in Kuching, Kota Samarahan and Serian were involved in organising the forum with the support from the Sarawak Convention Bureau.

Adding to the Leo Club’s praise, Snowdan commented that he was optimistic of the forum as it would auger well with the younger generation and give them a chance to do community work under the guidance of their seniors.

He explained that the activity would help empower the youths and shape them into future leaders for the country.

“We need future leaders to lead the country to be better.”

The 44th Multiple District 308 Leo Forum 2017, from May 28 to 30, has seen a total turnout of 850 participating Leo Club members from Malaysia, Singapore, Brunei and Hong Kong.

The three-day event will comprise activities such as charity projects, an Amazing Race, three seminars on ‘Real Success’, an exhibition and symposium on “Spotlight on Children”, themed dinners and an Awards Night to conclude.