Sunday, January 29
You are at:Home»News»Sarawak»‘Struggle of IS militants nothing to do with Islam’
For the freshest news, join The Borneo Post's Telegram Channel and The Borneo Post on Newswav. 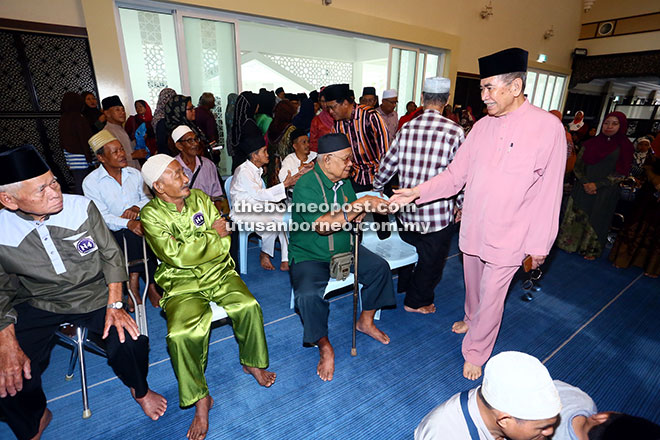 Wan Junaidi (right) and Dr Abdul Rahman greeting some of the recipients upon their arrival at Darul Hana Mosque. — Photos by Muhammad Rais Sanusi

KUCHING: Malaysians, especially the younger generation, must avoid being radicalised by Islamic State (IS) or Daesh ideology because their struggle has nothing to do with Islam but is for the political ambition of its leaders.

Minister of Natural Resources and Environment Dato Sri Dr Wan Junaidi Tuanku Jaafar said the terrorist organisation is making use of Islam to create conflicts around the world to spread their ideology.

“When it is political, even the countries in the Middle East do not support their struggle but for us, we feel worried because

Wan Junaidi, who is Santubong MP, was commenting on a Malay Mail Online news report that 28 Malaysians have joined the IS-backed Maute militants in the battle against Philippine forces in Marawi City on Mindanao island.

“We suspect there could be more who arrived separately,” a Manila-based intelligence office told Sunday Mail.

Wan Junaidi, who is a former Deputy Home Minister, said the effort of the Malaysians who joined the Maute militants in the battle against Philippine forces in Marawi City on Mindanao island was ‘useless’.

“They are doing something that will not give any positive outcome to their own community (nor) to the Muslims in Mindanao but instead they will face military action from the Philippine government.”

Wan Junaidi said he was confident that those who joined the battle could not win the ‘war’ but would only cause death and damage to innocent civilians and to themselves.

“Their ideology is wrong, it has nothing to do with religion. In fact, those who died (during the hostilities created by the IS) were found to have no religious background, which means, they didn’t know what the religion is all about and what is religious by Islam.”

Instead of resorting to violence, Wan Junaidi said Muslims should utilise their knowledge on science and Islam to help the world.

Earlier before presenting the contributions, Wan Junaidi urged parents to encourage their children to study hard up until university level to ensure that they will have a promising future.

He said since the state government under the helm of Datuk Amar Abang Johari Tun Openg is committed to bring Sarawak into the digital economy, therefore, the state needs talents and expertise.

Among those present at the event were Datuk Seri Feona Wan Junaidi and Assistant Minister of Rural Electricity Dr Abdul Rahman Junaidi.