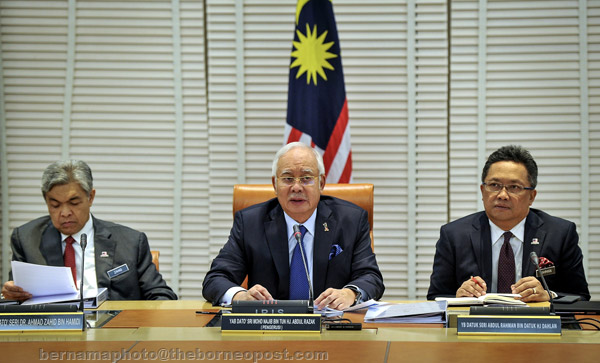 He said 93 PEB KPIs, which were endorsed by the MEB, had high impact, mosly based on results with a higher target set for 25 ministries, including the Prime Minister’s Department for last year.

“We took note that the 23 ministries had reached at least the 90 per cent KPI target set last year,” he told reporters after chairing the meeting.

The Prime Minister said the main achievements of the PEB of ministries and agencies in 2016 were, among others, the awards of 63.8 per cent of the estimated value of annual works to Bumiputera contractors in the construction of major highways such as the West Coast Expressway (WCE), the Duta-Ulu Klang Expressway 2 (DUKE2), the East Klang Valley Expressway (EKVE), and Sungai Besi-Ulu Klang Expressway (SUKE).

Najib said the PEB KPI for Ministries this year was formulated in line with the strategy and objectives of the 11th Malaysia Plan (11MP) and the Bumiputera Economic Transformation Roadmap 2.0.

He said 125 Bumiputera Economic Empowerment KPIs, which were high-impact in nature and result-based, were approved by the MEB for all ministries and the Prime Minister’s Department.

“The Bumiputera Empowerment Agenda (BEA) KPI for 2017 will focus specifically in the areas of vendor development, Bumiputera supply chain in strategic sectors, the training programme under the 1Malaysia Training Scheme (SL1M), the construction of affordable housing, and the introduction and improvement of the police for the specific distribution, and Bumiputera procurement,” he said.

On the 2016 KPI achievements of Government-Linked Investment Companies (GLICs) and selected Government-Linked Companies (G20), Najib said that five GLICs and 17 of G20 demonstrated a level of maturity with positive results and more robust growth since the programme was implemented in 2014.

Under the implementation of the BEA KPI of the GLICs and G20, he said seven key areas involved were vendor development programme, main companies dedicated to the specific supply chain distribution, human capital, ownership of non-financial assets, Bumiputera equity ownership in the corporate sector, and procurement, he said. Najib said among major achievements registered last year were absorbing 72 new vendors into the Vendor Development Program from 49 in 2015, coaching eight national-champion category vendors and a regional-champion category vendor, and training 11,888 graduates under SL1M from 6,422 in 2015.

In addition, he said 3,476 affordable housing units were built from 213 in 2015 and the procurement of Bumiputera companies amounted to RM13.4 billion compared with RM11.8 billion in 2015.

The prime minister said overall, the value of the Bumiputera initiative last year surged to RM42.1 billion compared with RM30.0 billion in 2015, while GLICs and G20 achieved 95.3 per cent of the KPI target set last year. — Bernama