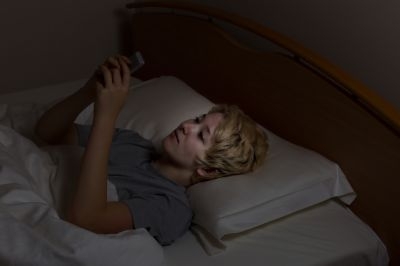 Funded by the Australian Research Council, the world’s first long-term assessment of adolescent mental health regarding late night mobile phone usage examined student’s quality of sleep, along with mood, aggression, coping skills, self esteem and whether they were experiencing any symptoms of depression.

The process was conducted as an annual survey over four years and included 1,100 students from 29 schools.

When the subjects began the process, they were in year eight of high school, when the program concluded, they had hit year 11.

The questionnaires focused on what time of the night students continued to receive or send text messages and phone calls.

“We have demonstrated how poor sleep is the key link connecting an increase in night-time mobile use with subsequent increases in psychosocial issues.”

Around two thirds or 65 percent of students in year eight who owned a mobile phone, reported to use it regularly after “lights out.”

When the study concluded four years later, the figure was 78 percent, finding that “as their levels of mobile phone use grew over time, so did their poor sleep behaviour,” co-author of the study, Dr Kathryn Modecki said.

According to Mark Levi, a Sydney-based sleep doctor, the scientific reason for why mobile phones can have such a negative influence on sleeping patterns is due to the unnatural light they produce.

“So the more you sit in bed and watch TV, play with your tablet, play with your phone and have your phone beeping at three o’clock in the morning, all these things affect the slow waves of your sleep pattern and will give the person poor quality sleep.”

“Blue light is a real, real problem in the bedroom. It’s a big, huge problem.”

For Levi, the findings of the study are no surprise, “there is no question, no question at all that it’s a growing issue with teenagers, adolescents and the young,” the sleep expert said.

“If I nudged you every couple of minutes in bed, you wouldn’t sleep very well.”

“So when a phone is beeping all night or they are watching a screen all night, it’s affecting their sleep a lot and we’re seeing child with sleep patterns that are disturbed and it’s going to affect their attitude, their cognitive skills, their concentrations skills, their moodiness during the day.”

Despite the damning findings, Vernon said, the answer to solving the problem is not to simply ban teenagers from using their devices, but rather to find ways of promoting better sleep habits to adolescents. – Bernama