Tuesday, September 29
You are at:Home»News»Sarawak»State’s Syariah family law to be reviewed — CM 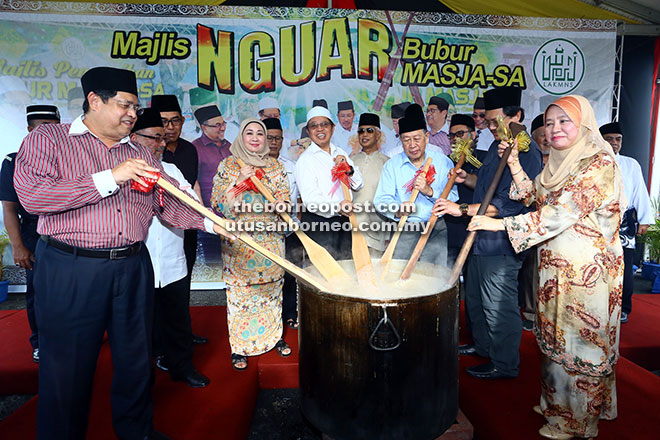 Abang Johari (centre) and other VIPs and invited guests stirring the porridge at the launch. — Photo by Muhd Rais Sanusi

KUCHING: State Syariah family law, particularly on divorce and alimony involving converts will be reviewed to provide better protection for the affected spouses and children.

The review to provide fairness to all parties will be holistic, Chief Minister Datuk Amar Abang Johari Tun Openg told reporters after he officiated at the distribution of 13,000 packets of Masja-SA porridge at Masjid Jamek Negeri in Petra Jaya here yesterday.

“This law will be reviewed and I am asking Sharifah Hasidah to do a study on the review. It may take six to eight months to complete the study and the Bill over it may be tabled either in November or April,” said Abang Johari.

“We need to manage our community therefore we have to lessen the number of divorces.

“As children are also affected by separations and divorces, we must look for ways to create fairness for all parties involved. We also need to provide education to people so they contribute to the strengthening of the family institution,” he added.

He acknowledged the generosity of Muslims in Sarawak whose tithes to the Baitumal fund amounts to RM100 million per year.

Muslims in Sarawak are able to contribute in enlarging Baitumal assets because of the state’s (political) stability, he added.

Mohd Sabry in his welcoming speech said around 1,000 children made full use of Masjid Jamek Negeri where they learn to recite the Quran.

During the ceremony, nine masjid and surau from here, Samarahan and Serian also received donations from LAKMNS.

Previous ArticleWWF: Sarawak may lose some endangered, vulnerable species
Next Article Caught between profits and security