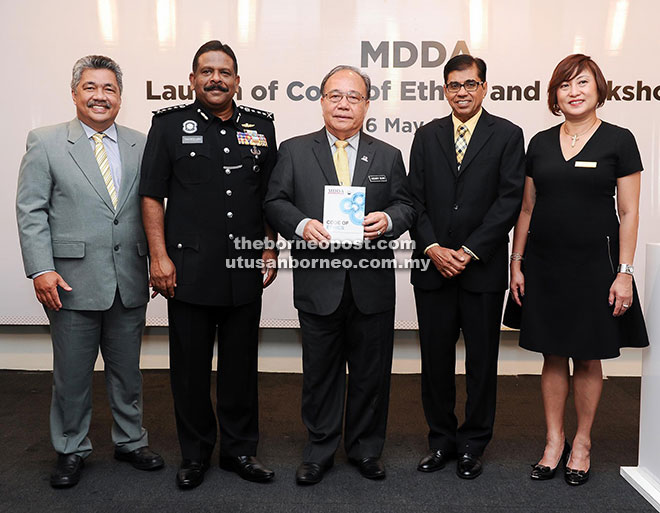 (From left) Rosedy, Thaiveegan, Henry Sum, Zainal Abidin and Datin Sylvia Koh at the launch of MDDA’s Code of Ethics and workshop event.

KUCHING: The Malaysian Direct Distribution Association (MDDA) has issued a warning to the public to be aware of illegal schemes that offer very high returns on investments within a very short period.

MDDA president Rosedy Issa said the public could be easily confused between valid direct selling companies and illegal schemes such as the illegal pyramid and ‘Ponzi Scheme’ – commonly known as ‘Money Games’.

According to MDDA statement issued on Thursday, many Malaysians have already fallen prey to such scams.

MDDA – a non-profit organisation that represents direct selling companies in Malaysia and also one that promotes ethical, responsive and excellent business conduct – refers the public to the alert by Bank Negara (BNM) on the list of companies and websites that are neither authorised nor approved under the relevant laws and regulations administered by the Malaysian central bank.

Schemes such as foreign exchange (forex) trade and gold investment, it pointed out, cunningly camouflaged their business and operate under a multi-level marketing (MLM) umbrella.

BNM has set up the National Coordination Committee, which includes the Trade Ministry, police, Companies Commission of Malaysia (CCM), and Securities Commission (SC) to coordinate enforcement activities under AMLATFAPUAA 2011.

Members of the public are also encouraged to report any illegal or suspicious financial entity and activity as highlighted by BNM such as illegal deposit taking, illegal foreign exchange trading scheme, illegal money services business activities, improper market conduct or practices by BNM’s licensees, misuse of BNM and senior officers’ names and positions and other illegal financial activities expressly mentioned under the relevant law and regulations administered by BNM.

Recently, the MNNA launched its Code of Ethics, which acts as a robust series of policies that every MDDA member must abide by as a condition of membership.

This Code is an obligation that requires a level of ethical compliance from companies and direct sellers, which conforms with or exceeds applicable legal requirements.

The Ethics Arbitrator shall adjudicate this Code, pursuant and in the spirit of the Direct Sales and Anti-Pyramid Scheme Act 1993.

“As an association with the intention and responsibility to improve the industry of direct selling, MDDA has come out with this codified Code of Ethics for our member companies. It sets out the duties and obligations for members and their distributors towards the protection of consumers and respecting other direct selling companies,” Rosedy emphasised.

MDDA is on a mission to distinguish itself as a self-regulating body, dedicated to assisting its members in achieving excellence in direct selling.

They also act as a watchdog for the public and consumers to curb unscrupulous acts or malpractices by direct selling companies.