Wednesday, July 8
You are at:Home»News»Sarawak»Former Pujut rep to file defamation suit in Kuching next week 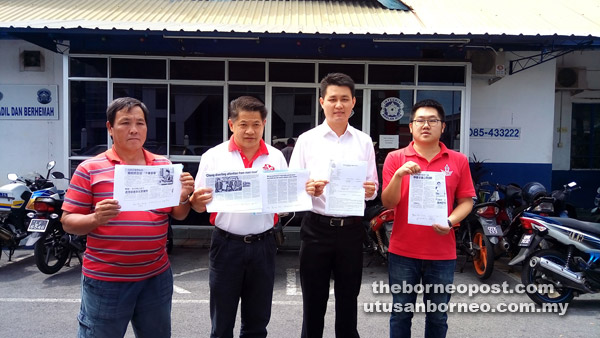 Dr Ting, when met after lodging a police report at Miri Central police station (CPS) yesterday, said he and the Democratic Action Party (DAP) had given sufficient time for Wong to apologise for saying that he (Dr Ting) was bankrupt.

“Today, we came to lodge a police report against Wong, who has maliciously and on several occasions said that I was (declared) bankrupt twice in Australia.

He claimed that Wong’s public statement published by both print and online media was a deliberate effort with malicious intent to damage his personal reputation (as a qualified medical practitioner) and the reputation of the DAP for the purpose of political gain.

“He uses all sorts of bullying tactics, baseless accusations and personal attack against me. That is why we came to lodge the police report,” he said.

Dr Ting pointed out that he would assist police in the investigation and would provide correct information to the authority.

Meanwhile, state DAP secretary Alan Ling, who accompanied Dr Ting to lodge the report, hoped that police would carry out the investigation impartially.

“Wong had threatened to lodge a report on false declaration if we lodge a police report against him.

“We welcome him (to lodge a report),” Ling said.

On another note, he advised Wong to stop making threatening remarks as they had given him enough time to apologise.

“He (Wong) seems not interested, (therefore) this is our last resort,” Ling said.

Dr Ting and several DAP members will be in Kuching next week to file the defamation suit.

Previous ArticleGovt to deal with rising population in Kpg Melayu Bau, assures rep
Next Article Modi tells Macron India will ‘go beyond’ Paris climate agreement after US quit from the deal